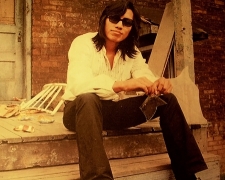 If this film doesn’t make you feel better about life… then what is wrong with you?  Winner of the audience award for best documentary at the 2012 Sundance Film Festival, Searching For Sugar Man is a powerful debut from 35-year-old Swedish filmmaker Malik Bendjelloul.

It’s the story of a singer-songwriter from Detroit who tried to break into the American music scene in the early 1970s.  He was known as Rodriguez and was discovered in a dingy, smoky bar while playing a guitar with his back to audience.  Notable producer Steve Rowland compared him to Bob Dylan and believed that he had incredible potential.

Unfortunately, that “potential” didn’t translate into sales.  Rodriguez recorded just two albums – Cold Fact in 1970 and Coming From Reality in 1971.  Both went nowhere.  For whatever reason, the songs didn’t catch on.  The public weren’t interested.  Rodriguez was subsequently dropped by the record label and that was that.

Well actually, it wasn’t.  There is a lot more to this story.  No one is exactly sure how it happened but a copy of Rodriguez’s first album made it to South Africa.  Given the strong “anti-establishment” theme contained therein, his songs developed a cult-like status with those opposed to Apartheid.  Some songs were banned from the airwaves but they still spread quickly thanks to the newly invested cassette tape.

Rodriguez had become one of the most popular musicians in South Africa.  However, no one knew anything about him.  The rumour was that he had committed suicide following the failure of his two albums.  In the mid 1990s, journalist Craig Bartholomew and music store owner Stephen Segerman tried to find out more.  Who was Rodriguez?  Where was he from?  Why weren’t his albums available in United States?  These questions were finally answered… in the most amazing way possible!

Other reviews will provide more details but that’s about all I’m prepared to reveal.  The first half of this film is mysterious whereas the second half is wonderfully inspiring.  It’s proof that truth really is stranger than fiction.  I’d heard the full story before seeing the film but it’s not until you watch the interviews and hear Rodriguez’s music that it fully sinks in.

Malik Bendjelloul first heard the tale in 2006 and thought it make for a perfect documentary.  He quit his job and went travelling through South Africa conducting interviews and piecing the narrative together.  It took roughly 5 years to complete and he wasn’t paid for most of it.  It reached the point where he was shooting footage on his iPhone using an application that cost just $1.

He’s pulled it off though!  Using a mix of re-enactments, archival footage and interesting interviews, Bendjelloul has crafted one of the year’s most compelling documentaries.  Our eyes are opened to this gifted artist but we also gather an appreciation for life in the slums of Detroit (Rodriguez’s home town) and the oppression in South Africa during the 1970s.

There are simply no excuses not to see Searching For Sugar Man.