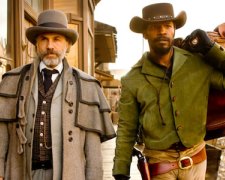 There are few filmmakers working today who can generate as much buzz as Quentin Tarantino.  It’s not a question of “if” you will see a new Tarantino movie but rather a question of “when” you will see it.  You don’t even need to know the actors’ names or have an idea of the story.  The fact that Tarantino is sitting in the director’s chair is the only impetuous required to get you inside a darkened theatre.

Django Unchained is Tarantino doing what he likes – reviving an old genre and throwing in (1) a few surprises, and (2) plenty of violence.  He treated us to a martial arts flick with Kill Bill and a 70s-style exploitation film with Death Proof.  This time around, he pays homage to the American western… and has a lot of fun in the process.

Set in Texas 1858, the first character we meet is Dr King Schultz (Waltz).  He was once a dentist but he’s now found a more lucrative profession.  In his own words, Schultz “kills people and sells their corpses for cash”.  That may give the impression that he’s a crazed murderer but nope, that’s not the case.  This is all above the law.  Schultz is a bounty hunter.  He captures those criminals, whether it be dead or alive, that are highly sought by the authorities.

Usually a one-man operation, Schultz has taken on a partner to help with a particular assignment.  There are three violent brothers involved in cattle rustling and stagecoach robberies.  The problem is that Schultz doesn’t know how to identify them.  He only knows their names.

This is where a black slave named Django (Foxx) will come in handy.  Schultz purchases Django from a slave trader (a humorous opening scene) and agrees to give him freedom if he can help locate the three criminals he seeks.  It’s an easy choice for Django – “I kill white people and get paid to do it. What’s not to like?”

The two soon become a formidable team.  The liberal, well-spoken Schultz seems to enjoy having an African American as his partner.  He’s not actively trying to abolish slavery… but Schultz is an affable attention-seeker who likes stirring the pot.  He loves the quizzical expressions when he and Django ride into a small town side-by-side.  Onlookers can’t believe they’re looking at a black man on a horse.  Such a thing was unthinkable at the time.

Django appreciates his newfound wealth and freedom but there’s something more important he seeks – his wife, Broomhilda (Washington).  She was recently sold as a prostitute to Calvin Candie (DiCaprio), a wealthy Mississippi plantation owner with a fetish for gladiator-type fighting.  Schultz and Django concoct a risky plan to visit Candie’s estate and rescue Broomhilda from his villainous ownership.

Django Unchained drags on a little too long at the end (clocking it at a total of 165 minutes) but it’s still a wildly amusing ride.  The brutal action is mixed with lengthy dialogue-driven sequences.  If there’s one guy who knows how to create great conversation between characters, it is Quentin Tarantino.  Schultz and Django find themselves in many tricky situations and it is more fun watching them talk their way out of trouble as opposed to getting involved in a shoot-out.

Tarantino can’t take all the credit though.  You won’t find many other films this year with a better collective group of performances.  Christoph Waltz is again an ideal fit for the lead role (he won an Oscar last time he worked with Tarantino on Inglourious Basterds) but he can’t be singled out.  That’s because Jamie Foxx, Leonardo DiCaprio and Samuel L. Jackson are just as good.

Whilst there are a bunch of wonderful individual scenes (the Ku Klux Klan bit springs to mind), I felt the broader story needed more meat on the bone.  I never quite understood the mindset of Dr Schultz.  He’s a guy driven by wealth and notoriety (with no competition in the bounty hunter trade) and yet he keeps throwing himself into dumb, ridiculously life-threatening situations.  Why he so willingly agreed to help Django rescue his wife is also something that didn’t sit right.

This is a minor nit-pick though.  If only all films could contain such precise dialogue and such distinctive characters.  I’d be entertained every time I went to the cinema.