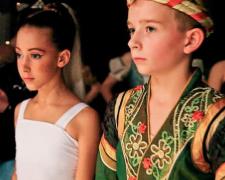 It premiered at the 2011 Toronto Film Festival. I first saw it last June at the 2012 Sydney Film Festival. Now, almost two years after it was completed, First Position is finally getting a cinematic release, albeit a limited one, here in Australia.

My first reaction – thank goodness! I’ve mentioned this film to many people since I saw it in Sydney and I was worried that others wouldn’t get the same chance. I’m a huge supporter of the documentary genre and if this film doesn’t put a smile on your face, you are too hard to please.

There is a coveted ballet competition held each year in New York City known as the Youth America Grand Prix. It is open to those aged between 8 and 19 and performers qualify for the finals through a series of heats that are held around the world. Younger dancers are looking to win trophies. Older dancers are looking to win scholarships into prestigious ballet schools. The stakes are extremely high.

Using this as the subject for her first feature film, Bess Kargman has followed a group of very different dancers in the lead up to the 2010 competition. They’re all ridiculously talented. There’s no question about that. They practice for hours every day and put their bodies under immense stress.

This film is about more than just great dancing, however. For starters, it highlights the value of passion, hard work and dedication. These kids have sacrificed so much in pursuit of their dreams. Joan Sebastian is a 16-year-old who left his family in Colombia and moved to the hustle and bustle of New York City to pursue his career as a dancer. There’s a heartfelt scene where he telephones his parents, who he hasn’t seen in more than a year, and opens up about how much he misses them.

There’s also the story of Michaela – a 15-year-old who was born in war-torn Sierra Leone. Her father was murdered, her mother died of starvation and at the age 4, Michaela was fortunate to be adopted by an American family in New Jersey. She now has lofty ambitions – to become a successful ballet dancer and to one day return to Sierra Leone to start her own dancing school.

There’s a reason that my eyes were a little moist during the film’s closing moments. This is a documentary that makes you care about these people. You understand who they are and you want them to find happiness. The final half hour, where they compete in the New York City finals, will leave you enthralled. You see every emotion – from the nervousness in the dressing room to the sheer euphoria as they complete their performance and soak in the audience’s applause. It’s all on display and Kargman captures it through the camera lens.

You’re likely to feel a little nervous yourself as you watch the presentation ceremony. Which dancers will earn prizes? Which dancers will earn scholarships and contracts? You’ll see not just the shock of those on stage but also the split-second reactions of the coaches and family members in the audience. It’s so beautiful to watch.

A documentary on ballet dancing could have targeted the negative elements associated with the industry – pushy parents, overbearing coaches, dodgy judges, boys being teased at school and kids losing their childhood. These elements are touched on within First Position but they’re not the focus, nor should they be. This film is intended to be a celebration of dance and a look at how hard one must work to succeed.