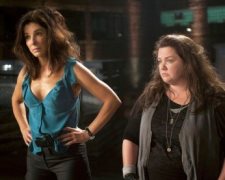 Sarah Ashburn (Bullock) is a by-the-book FBI agent based in New York who always gets results. She’s organised, dresses professionally and lives in a crystal clean apartment. Shannon Mullins (McCarthy) is a rough-as-guts police detective working in Boston who has thrown the book out the window. She disregards protocol, has a foul mouth and never treats anyone, including her superiors, with respect.

These two don’t know each other… but they’re about to. Ashburn has been sent to Boston to find out who is the kingpin behind a major drug dealing operation. The case has extra importance (surprise surprise) because Ashburn has been assured by her boss (Bichir) that if she can arrest those responsible, she’ll receive a major promotion.

Mullins doesn’t react too well to Ashburn’s arrival. She’s been arresting local drug dealers for years and she’s not too pleased with the FBI storming in and stealing her thunder. After a few tense interchanges, they realise that they’ll need to work as a team. Ashburn needs Mullins’ local knowledge of the area. Mullins needs Ashburn’s access to high-level FBI intelligence.

If I described the plot and nothing else, you’d probably think of this as a standard, unoriginal buddy comedy. It’s been done again and again in Hollywood. You take two people with vastly different personalities and you put them together in some silly, clichéd scenarios. Lo and behold, they magically become best friends.

That wouldn’t do the film justice. The key to any buddy comedy is the chemistry between the two leads and there’s so much to love about the pairing of Sandra Bullock and Melissa McCarthy. Bullock is great as the arrogant FBI agent but it’s McCarthy who steals the show with her offensive, politically incorrect insults. If I didn’t know better, I’d say her entire performance was improvised given the natural way in which she delivers her dialogue.

The Heat is director Paul Feig’s first film since the very successful Bridesmaids and marks the feature film writing debut for Katie Dippold (a writer on the Parks & Recreation television series). Regardless of what you make of the movie, they’re to be applauded for the fact that this is the only major studio release over the U.S. summer that has two females in the leading role. We don’t see it often enough. They also deserve credit for a comical supporting cast that includes cameos from Kaitlin Olson (It’s Always Sunny In Philadelphia) and Tony Hale (Arrested Development).

As we all know though, comedy is divisive. There have been critics on Rotten Tomatoes who have described this as “uneven”, “childish”, “uninspired” and “boring”. On the flip side, there have been an equal number of critics using adjectives that are far more positive. To address one criticism, who cares if we’ve seen Bullock and McCarthy in similar roles before? All that matters is that in this movie, they made me laugh.