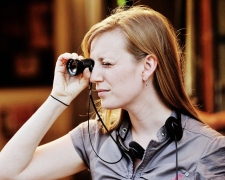 It remains one of my favourite lines from a movie. In the opening scene of Alfonso Cuarón’s 1998 adaptation of Great Expectations, Ethan Hawke sets the stage by saying – “I'm not going to tell the story the way it happened. I'm going to tell it the way I remember it.” It’s a perfectly articulated reference to the fact that our memory of events changes over time, whether we realise it or not.

This is concept is explored further in Stories We Tell – a wonderful documentary from 34-year-old Canadian filmmaker Sarah Polley. For those unfamiliar with Polley, she started her career as an actor – appearing in movies such as Dawn Of The Dead, Go and The Sweet Hereafter. In 2006, she moved behind the camera and picked up an Academy Award nomination (adapted screenplay) for her feature debut, Away From Her. This was followed by the amazing comedy-drama Take This Waltz which made my top 10 list last year.

We often see filmmakers drawing on their own experiences but a film doesn’t get much more personal than this. Stories We Tell recounts Polley’s attempts to unravel a mystery within her own family. For many years, her brother and sisters joked that she looked nothing like her father. As she grew older, that joke transformed itself into a question. Could this be true? What if her dad was not her biological father? Did her mother have an affair with another man?

It wouldn’t be fair of me to reveal any more details about the plot. This is a film that builds intrigue and offers a few surprises. Just when you think you know where it’s heading and what it’s emphasising… the film unexpectedly changes direction. It’s so beautifully done. It’s like a subtler version of the infamous 2010 documentary Catfish which followed a guy trying to track down as a girl with whom he’d shared an online relationship through Facebook.

The story is told through a range of interviews intermingled with archival footage. Given that her mother died of cancer when she was just 11-years-old, Polley had to go in search of her mother’s old friends and work colleagues to find answers. She also speaks with her older siblings who turn their interrogation back on her. Why is she making the movie? Who is interested in hearing the secrets of a small, unknown family from Toronto?

The reason is that while the focus may seem narrow, Stories We Tell has a much broader message. To loop back to my earlier point, there’s a moment in the film when Polley notes that “the truth about the past is often ephemeral and difficult to pin down”. Through her interviews, Polley hears varying perspectives on her late mother and different versions of events. How does she know which to believe? Were the interviewees hiding something? Or had their recollection changed over time? I’m guessing these are questions that a police detective must ask themselves every day.

There aren’t enough female directors working in Hollywood and we’ve seen numerous articles on the subject that try to promote the work of the very best. I’m a big fan of Mira Nair (The Namesake) and Kathryn Bigelow (Zero Dark Thirty) but with three outstanding films now under her belt, Sarah Polley is now on top of my list.