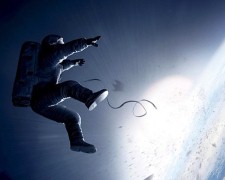 When it comes to action films, the recent trend has been towards “more”. There are more booms, more fights, more visual effects, more big name actors, more subplots and yes, more money. It’s like a pissing contest with each director trying to distinguish themselves and give us something that we’ve never seen before.

Mexican Alfonso Cuarón is one of the finest filmmakers working today. Along with such great films as Children Of Men and Harry Potter And The Prisoner Of Azkaban, he’s the man responsible for one of my all-time favourite foreign language films – Y Tu Mamá También – released back in 2001 and featuring an ending that I still can’t shake.

It comes as no surprise to see Cuarón straying away from convention and steering the action genre in a very different direction. Gravity shows how to extract maximum tension from a minimalist story. It runs for just 90 minutes and follows two astronauts, played by Sandra Bullock and George Clooney, who become trapped in space after their shuttle is struck by debris. Stuck 600km above the Earth’s surface with no radio contact, they need to somehow find a way home.

You don’t need to worry about aliens. This isn’t science fiction. These two have to battle something just as difficult – space itself. What do you do when you’ve become detached from the shuttle during a spacewalk and are spinning end over end? How do you stop? There’s no gravity, there’s nothing to cling onto. What do you do when your space craft catches fire and all you have is a single extinguisher? There’s no one else to help you.

Let’s cut to the chase – this is a very good film. It will tap into your fears and leave you rather anxious. There’s a terrific scene where a panicking Sandra Bullock is floating past the spacecraft with her arms outstretched. The stakes couldn’t be any higher. If she can’t grab a hold of something, it’s game over. She’ll drift into space and will never be seen again.

A few moments feel a little too constructed (perhaps trying too hard to create tension) but you’d be hard pressed to find anyone who can fault this film’s incredible visuals. There were several moments where I was asking myself the question – how did Cuarón pull this off? It’s a film that relies heavily on special effects but you can’t tell while watching it. With the help of 3D (handled effectively), you’d think you were hovering alongside these characters with Earth serving as a beautiful backdrop. Should I be praising the cinematographer? Or the visual effects crew?

Given the lack of sound (you won’t be hearing any explosions in space), Gravity uses a strong music score from Steven Price (The World’s End) to compensate and help add to the drama. It’s yet another way that the movie distinguishes itself – it’s an action film that’s almost a silent film!

Do see Gravity. Your friends will be talking about it, trust me.