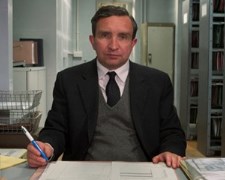 What is the purpose of a funeral?  Is it one final act to respect the wishes of the deceased and to allow them to move into the afterlife?  Or is it more for the benefit of those still alive – a way of providing closure and a chance to reflect in the company of friends and family.

These questions get to the heart of Still Life – an immensely warm-hearted drama from writer-director Uberto Pasolini (a producer on The Full Monty).  It’s the story of John May (Marsan), a middle aged man who has worked for the local council for 22 years.  When a resident dies with no immediate next-of-kin, it is John’s responsibility to organise a funeral or cremation.  He also does his very best to track down anyone who may wish to be present.

It’s a movie bursting with poignant moments.  In the opening montage, we see John at a series of funerals.  A coffin rests at the front of the church, a priest reads a simple eulogy, and John stands by his lonesome in a back pew.  He wasn’t able to find any friends or family members to attend.  It’s sad to think that someone has left this world and there isn’t a single person who cares.

Equally moving are the sequences where John enters the home of a recently deceased individual and pieces together their final hours.  He looks at the bed which has been slept in for the last time.  He looks at the dirty dishes which will never be cleaned.  He also flips through old photo albums and scrapbooks – looking at tiny fragments of a life and trying to get a perspective on who the person was and what they achieved.

The reason John cares so much… is contained in his own life story.  He resides in a small, run-down flat and lives alone.  He has the same meal every night – tuna with toast, coffee and an apple.  He works in a dull, grey office with no view.  He always wears a black tie and suit.  In essence, John is the kind of guy you don’t notice, the kind of guy who doesn’t stand out.  He keeps to himself and like so many of the people he investigates, he too has no friends or family.

The crux of the film’s narrative arrives when John is called into his boss’s office and told that he’s being made redundant.  The council is introducing “efficiency savings” and John is an easy target given his thorough work ethic.  They’d prefer to let someone new take the role – someone who doesn’t incur extra costs on funerals when a cremation would suffice, and someone who won’t spend weeks searching for a long lost next-of-kin.  John is then left with one final case – an elderly man by the name of William Stoke.

Backed by an agreeable film score from Academy Award winning composer Rachel Portman (The Cider House Rules) and the idyllic cinematography of Stefano Falivene (Bel Ami), Still Life is a beautiful film.  It’s dripping with nostalgia and contains many sweet, memorable touches – such as a moment when John sits in an old arm-chair and looks across at a curious dog.

46-year-old Eddie Marsan (Happy-Go-Lucky, Sherlock Holmes) appears in every scene and it’s the finest performance of his career thus far.  Relying more on expressions and actions (as opposed to dialogue), you get a clear sense of his character’s tender, sympathetic nature.  You’ll be dearly hoping that he can find happiness in his own life.

A few plot developments feel a touch forced but they’re easy to forgive given the film’s charm and thought-provoking premise.  There aren’t many films that have reduced me to tears but Still Life can now be added to that short list.