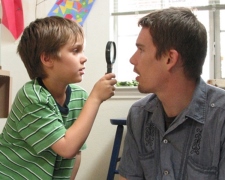 Michael Apted’s 7 Up series is one of great achievements in world of cinema.  For those unfamiliar, Apted made a documentary back in 1964 where he picked 14 British kids and asked them a bunch of questions.  He has met with them every 7 years since and the most recent instalment in his documentary series, 56 Up, was released back in 2012.

It’s a fascinating “big brother” type experiment.  We look back and see a bunch of excitable 7-year-olds talk about their interests and their big plans for the future.  Over time though, their priorities changed.  Some found success.  Some found much failure.  The series is a wonderful depiction of life and a look at how our perception of the world can change so quickly.

Writer-director Richard Linklater is an equally impressive director who has already taken this same concept and applied it in a fictional setting.  In 1995, he released Before Sunrise – a dialogue-driven drama that starred Ethan Hawke and Julie Delpy as two people who meet in Vienna and spend the day together.  Nine years later he followed with Before Sunset and nine years after that, he finished the trilogy with Before Midnight.  Like the 7 Up series, we see these characters evolve.  Their discussions today are far different from those two decades ago… and many will be able to relate.

With Boyhood, Linklater has taken this concept one step further and provided us with one of the year’s most memorable films.  It’s a 2 hour, 45 minute epic that chronicles the process of “growing up”.  When we first meet Mason (Coltrane), he’s a 6-year-old who seems solely interested in playing video games.  Over the next 12 years, we see him attend school, make new friends, drink his first beer, try smoking, land a part-time job, discover his first love, and consider going to college.

What’s so special about the film is not just the story… but also the way it has been created.  This isn’t a movie that was shot over a period of 6 weeks with a bunch of different actors.  Linklater found a cast back in 2002 and he brought them together for a few days each year to shoot the necessary scenes.  So the 6-year-old Mason we see in the film’s opening scenes is played by the same guy we see as the 17-year-old Mason when the credits start to roll.  The risks were high (what if an actor wanted to pull out?) and the patience shown by Linklater to bring this project to the screen is to be admired.

I was particularly struck by the seamless way in which we jump between timeframes.  Instead of putting an obvious “one year later…” warning on the screen every 10 minutes or so, Linklater provides subtler ways for us to recognise the shift in time.  There are changes in Mason’s hairstyle, the use of different songs and video game consoles, and certain landmark events that are discussed (such as the release of the sixth Harry Potter book and the Obama election win).

While the focus of the film is Mason and his journey of self-discovery, much attention is also given to the up and down relationships he shares with his mother (Arquette), father (Hawke) and sister (played by Linklater’s own daughter).  The interaction and dialogue feels so natural.  I became so interested, so invested in these characters that I kind of wished they were real.  I wanted to know more.  I wanted to be able to follow them after the final scene.

The performances are all superb.  No matter who he cast as the 6-year-old Mason, Linklater was always going to be taking a gamble as he had to keep that actor right through until he was a mature 17-year-old.  Ellar Coltrane turned out to be a terrific choice and I loved the way in which his character develops into a softly-spoken introvert (most teenagers in movies these days are loud, busy, insightful).

The awards season is still a few months away but there’s talk that Boyhood has a great shot at landing Oscar nominations for best picture and best director.  It’s not hard to see why.  This is a beautiful motion picture that will release the valve on your own childhood memories.

You can read by chat with star Ellar Coltrane by clicking here.