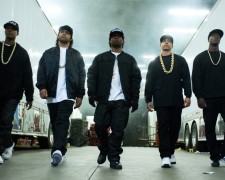 As of last week, Straight Outta Compton had grossed $135 million in the United States and had become the highest grossing music biopic of all time.  It has surpassed the likes of Walk The Line, Ray, Coal Miner’s Daughter, La Bamba, Amadeus and Jersey Boys.  It’s an impressive statistic that shows the movie has broad appeal and is not just for fans of the hip hop group N.W.A.

The film could be described and categorised a number of ways.  For starters, it’s a likeable rags-to-riches tale.  In 1986, a group of rappers from southern California visualised stardom.  It’s a dream that so many musicians have had but few have achieved.  There’s a scene where one of the rappers, Dr Dre (Hawkins), is berated by his mother for skipping work and school in pursuit of his fanciful goals.  I’d have said the same thing if in her position.  These guys had no back-up plan.

We’re now watching a movie about their lives and so it’s obvious that they found success.  They formed the group N.W.A. (with stands for Niggaz Wit Attitudes), helped create a record label, and released their first album in 1988.  The lyrics were considered too violent and profane and so they received no radio or television coverage.  Even MTV refused to play their music videos.  The controversy only helped boost their notoriety.  They became an underground sensation through word-of-mouth and it wasn’t long before they’d sold 3 million copies of their debut album.

This movie is about much more than their achievements.  It provides important insight into the discrimination they endured both before and after they found fame.  The lyrics for one of their most widely discussed songs, “Fuck tha Police”, highlighted the racial profiling and police brutality that was being experienced by the African American community but rarely discussed in the media.  The film also makes reference to the police beating of taxi driver Rodney King in 1991 and the subsequent riots in Los Angeles.  Has much changed over the last 25 years?  It’s something to think about.

An equally interesting layer to Straight Outta Compton is that it draws attention to the power struggle that existed within the group.  Given the cash being generated, there were disputes about contracts, royalties and entitlements.  An uneasy partnership had been formed between group leader Easy-E (Mitchell) and music manager Jerry Heller (Giamatti).  This didn’t sit well with Ice Cube (Jackson Jr) who decided to pursue a solo career.

The film hasn’t been immune from criticism despite the healthy box-office.  Given it was produced by Dr Dre and Ice Cube, some believe the film paints them in a better light than they deserve.  It overlooks the fact that Dr Dre physically abused several women during the early 1990s (which has since apologised for).  It also fails to explore N.W.A.’s misogynist lyrics that refer to women as “bitches” and “hoes”.  It seems counterproductive to be using their music to help raise awareness about discrimination against black Americans… while demeaning women in the process.

I won’t begrudge anyone for disliking Straight Outta Compton for the aforementioned reasons.  That said, I believe the film’s strengths far outweigh its negatives.  N.W.A. aren’t portrayed as saints (Easy-E starts out as a drug dealer) and while yes, some details were left out, this was always going to be tricky given the abundance of characters and long time frame.  It all clocks in at just under two and a half hours which is best that director F. Gary Gray (Friday, The Italian Job) could do.

The young cast are superb with O’Shea Jackson Jr, the real life son of Ice Cube, being the obvious standout given his uncanny resemblance to his father at the same age.  The screenwriting team are also to be commended for the way in which the film blends comedy, drama and tragedy… with a bit of contract law thrown in for good measure.

To someone unfamiliar with the American rap scene, Straight Outta Compton will provide an absorbing look at a group of flawed, yet wonderfully talented artists.

You can read my chat with star O'Shea Jackson Jr by clicking here.