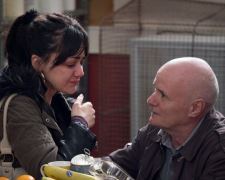 A lot has been said and written about the recent Federal election here in Australia and the Presidential election in the United States.  Many issues have been discussed and, judging by the number of posts on my Facebook and Twitter feeds, there are a seemingly endless number of viewpoints.  It’s often hard to dig through the detail and form an opinion of your own.  Adding to the complexity are lies that are told, facts that are concealed, and data that is poorly analysed.

I, Daniel Blake takes a complex issue and breaks it down into its simplest form – by putting you in someone else’s shoes and asking you to think about it.  The film begins by introducing us to 59-year-old Daniel Blake (Johns), a widower with no children who lives in a small apartment in Newcastle (the one in England).  He has spent close to 40 years working as a carpenter but recently suffered a heart attack on the job.  Doctors and specialists have provided him with medication and ordered him to rest for several months before returning to work.

The film’s opening scene has Daniel interacting with a contracted “health care professional” at the British welfare office.  They are running through a formal checklist of questions to determine if he is eligible to receive welfare payments from the government.  A few days later, a letter arrives in the mail with a negative response.  They have ignored the doctor’s assessment and declared him fit for work.  He tries to contact the welfare office’s help line but after waiting two hours to speak with someone, that too amounts to nought.

This is a sad tale about a man who needs help but lives in a world where support is not forthcoming.  Daniel is a self-described “dog with a bone” who refuses to accept defeat but he’s stuck in an endless loop of beurocracy and “red tape”.  He can’t appeal until he receives a phone call from the “Decision Maker”.  He can’t get unemployment benefits in the interim until he completes an online form (he doesn’t know how to use a computer) and agree to conditions he cannot meet given his health issues.

While waiting at the welfare office, he befriends Katie (Squires), a single mother in an even worse financial situation.  Her case officer is threatening to withhold her unemployment benefits because she did not arrive on time for her appointment.  There was a valid reason for her lateness but it counts for nothing – the rules are the rules.  Katie is desperate to work but cannot find a job.  She forgoes dinner some nights because she can only afford enough food to feed her two young children.

Some might describe this as the comedy of the year.  There were plenty of laughs at the preview screening I attended.  Let’s be honest though – there shouldn’t be any humour in this situation but it’s hard to react differently given its sheer absurdity.  Daniel and Katie aren’t treated like people.  They are numbers is a system.  When a welfare officer considers going outside the rules and helping Daniel, she is immediately shut down by her superior.  You have to ask yourself the question – is this really what we want as society?

Directed by 80-year-old Ken Loach (The Wind That Shakes the Barley), I, Daniel Blake took home one of cinema’s most coveted prizes – the Palm D’or at the 2016 Cannes Film Festival.  It’s easy to see why the jury, headed by Australian George Miller, was moved by this great piece of cinema.  The leading performances from Dave Johns and Hayley Squires are outstanding.  They’ve created two ordinary, every-day characters that are well-intentioned and are passionately trying to make ends meet.  A lot of people will be able to relate.

Cinema has the power to open our eyes to the world’s issues and offer a path forward if we’re willing to take it.  I, Daniel Blake is a great example and should not be missed.

You can read my chat with star Dave Johns by clicking here.