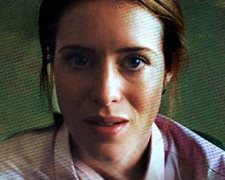 If you think that’s impressive, wait until you see what he’s created with Unsane.  The entirety of this 98 minute film was shot using three iPhone 7 Plus phones and three types of lenses.  He’s not the first filmmaker to shoot an entire movie using this technique (Sean Baker used iPhone 5s when making Tangerine in 2014) but he’s certainly the most high profile.  The movie debuted in more than 2,000 theatres when released in the United States last month.

It’s a cool gimmick further enhanced by a terrific script from writers Jonathan Bernstein and James Greer.  Sawyer (Foy) is a young woman who recently left her friends and family behind to take up a new job in a new city.  It wasn’t a career driven move.  Rather, she was being stalked by a creepy guy (Leonard) for more than two years and this was her only way of escaping his obsessive gaze and making a fresh start.

Talking through her problems with a counsellor, Sawyer admits that her recent run-ins with the stalker and the subsequent emotional trauma led her to briefly consider suicide.  It’s at that point where she’s asked to sign a form as part of another evaluation.  Remember folks – “always read the fine print.”  The form states that Sawyer willingly agrees to be incarcerated in a psychiatric ward for 24 hours so she can undergo an assessment as to the safety of herself and those around her.  She protests profusely and even tries to call the police but there’s nothing that can be done.  That’s her own signature on the bottom of the form.

There are two distinct genres at play here.  On one hand, this is a political movie.  After talking with a fellow patient (Pharoah) she learns the hospital is more interested in money than her wellbeing.  They’re looking for any excuse to incarcerate someone and demand their insurance company foots the bill.  Sawyer sums it up best when she says “they’re locking up sane people for profit.”  It taps into the dangers of capitalism and our desire to put personal wealth ahead of all else.  Has this happened in real life?  My best guess is “yes”.

On the other hand, this is a sinister thriller.  Sawyer’s stalker finds a way of infiltrating the hospital and poses as one of her instructing doctors.  She pleads for help from the nurses and other patients but her concerns fall on deaf ears.  To be fair, why would anyone believe the ravings of woman who has voluntarily incarcerated herself over the cool-headed words of a doctor with the right credentials and accreditation?

Soderbergh first came across British actress Claire Foy by watching The Crown (as many of us have) and thought she’d be interested in the role of Sawyer as a “welcome vacation” from her two years of playing Queen Elizabeth.  He made the right choice because Foy is outstanding.  This isn’t one of those goofy thrillers where you roll your eyes at the dumb choices her character makes.  The way she reacts (and over-reacts at times) is how I’d see myself if placed in the same position.  The fact is feels so real makes the scenario even more ominous.

The use of the iPhones helps create a sense of claustrophobia and the unusual “popping” score from Thomas Newman adds to the film’s uncomfortable tone.  It’s only April but I’m happy to declare Unsane as one of the year’s best films.