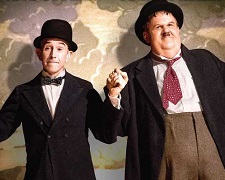 At a first glance, it’s an odd title.  If making a movie about one of the world’s most successful comedy duos, who were known to everyone as Laurel and Hardy, why use their first names instead?  It was a decision made at the very early stages of this British production and it signifies that we’ll see a different side to these well-known characters.  The focus of Oscar nominated screenwriter Jeff Pope (Philomena) is on their “off-screen personas” as opposed to what audiences saw in their movies.

That’s not to say the film ignores their box-office draw.  Between 1927 and 1933, they were making more than 10 films a year on average (one of them won an Academy Award) and their comedic stylings made them the biggest act in Hollywood.  This film picks up their tale in 1937 as we watch them prepare and shoot a scene for the MGM movie, Way Out West.

If there’s one thing this opening sequence highlights, it’s how much comedy has changed over time.  It’s cute watching them sing and make bad jokes but it’s impossible to think that these two guys could find fame and fortune today.  Jokes that seemed funny and edgy back then would be the sort of lame stuff you’d find in Christmas crackers today.  I’d hate to imagine what people of that era would make of Hannah Gadsby or the Coen brothers.

With the introduction out of the way, the film slips forward to the year 1953 and follows Stan Laurel (Coogan) and Oliver Hardy (Reilly) as they travel across the United Kingdom in what would be their final tour together.  They were both in the early 60s and their brand was starting to fade.  It took a little while for the publicity to ramp up but thanks to a few important public appearances, word got around and they were soon performing in front of adoring crowds in large, sold-out theatres.

There are laughs to be had watching Stan & Ollie but at its core, this is a story about friendship.  Laurel and Hardy were two men who came together by chance and then became inseparable.  They brought out the best in each other when it came to creativity (you’ll chuckle as they write gags for a Robin Hood spoof).  They were also a shoulder to lean on as times got tough.  It wasn’t all smooth sailing though and the arrival of their wives (Arianda and Henderson) in the film’s second half brings a few bubbling issues to the surface.

John C. Reilly (Chicago) spent roughly 4 hours in the hands of make-up artists each day as they re-created his character’s distinctive ears and chin.  They deserve applause but so too does Reilly in portraying Hardy as such a softly spoken, endearing character.  It’s a great performance which earned him a Golden Globe nomination.  Steve Coogan can’t be ignored with his strong performance and if you’re looking for a scene-stealer, Rufus Jones delivers as their cunning manager who is part fool, part genius.

This isn’t a particularly adventurous script and it plays out as you might expect but Stan & Ollie does a nice job keeping alive the memory of two gifted comedians whose work should never be forgotten.