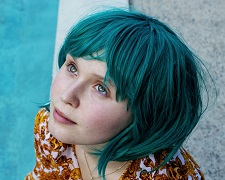 The life of Babyteeth began back in 2012 when the play, written by Rita Kalnejais, was performed for five weeks at the Belvoir St Theatre in Sydney.  Oscar nominated producer Jan Chapman (The Piano) and colleague Alex White went to the opening night performance and were wowed by the material.  They snapped up the film rights soon after and asked Kalnejais to adapt her work for the big screen.

It’s best described as an unusual love story.  Milla (Scanlen) is an introverted, insecure 10th grade student who loves the violin and lives with her two easy-going parents (Davis and Mendelsohn).  Moses (Wallace) is a 23-year-old drug addict who has been kicked out of home and has no job.  The pair meet on a train platform in unusual circumstances (Milla has a bloody nose) and after a few minutes of small talk, a connection is forged.

Adding a layer of complexity is the fact Milla has a terminal illness.  No one knows how long she has left but her parents realise it could be their daughter’s only chance of experiencing love during her lifetime.  They’re not thrilled by the choice of suitor (the mum describes her own actions as the “worst possible parenting I could ever imagine”) but they keep an open mind and, under their close supervision, let the relationship progress.

A lighter touch is applied to the opening two acts.  Essie Davis (The Babadook) and Ben Mendelsohn (Animal Kingdom) earn laughs as they grapple with their daughters’ romantic awakening.  Eliza Scanlen (Little Women) and Toby Wallace (Boys in the Trees) endear themselves to audiences with their silly conversations and general naivety.  First-time feature filmmaker Shannon Murphy sets a brisk pace with unexpected cuts to scenes and to Amanda Brown’s music score.

As expected, the tone shifts to something more dramatic in the closing act and, thanks to the strong performances from all four leading actors, the emotions really hit home.  You get a clear sense of the lessons learned and the suffering felt by each character.  The use of facial close-ups adds to the film’s impact.

The movies selected as part of the official competition for the 2019 Venice Film Festival included new works from Pablo Larraín, Noah Baumbach, Haifaa al-Mansour, Hirokazu Kore-eda and Olivier Assayas.  To see a first-time Australian director make the shortlist and compete against such big names says volumes about Babyteeth and its allure.