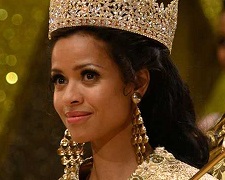 They’ve lost relevance today (for a myriad of reasons) but there was once a time when beauty pageants were incredibly popular.  Between 1966 and 1976, the Miss World competition was one of the top 5 highest rated TV programs for the year in the United Kingdom.  Pitched as “family entertainment”, households would gather around their televisions to watch contestants parade in their swimwear and reveal their measurements (bust, waist, hips).  The judges would then weigh in with their choice for the most beautiful unmarried woman in the world.

Misbehaviour takes place right in the middle of that pageant “boom”.  The 1970 edition, hosted by iconic American comedian Bob Hope, was historical for two significant reasons.  Firstly, the contestant from Grenada, Jennifer Hosten, became the first black woman to wear the crown in the event’s 20 year history.  Secondly, a group of Women’s Liberation activists disrupted the show and caused the live television feed to be disrupted.

Rather than focus on a single perspective, writers Gaby Chiappe (Their Finest) and Rebecca Frayn (The Lady) tackle the subject from multiple viewpoints.  The forceful Jo Robinson (Buckley) and a semi-reluctant Sally Alexander (Knightley) lead the group of activists.  The list of beauty pageant contestants including the apprehensive Pearl Jansen (Harrison) from South Africa and the aforementioned Jennifer Hosten (Mbatha-Raw).  Time is also spent following Bob Hope (Kinnear), his wife (Manville), and the long-time competition organiser, Eric Morley (Ifans).

Kudos to the writers, along with director Philippa Lowthorpe (The Crown), in crafting a movie with nuance and “greyness”.  It’d be easy to simplify Keira Knightley’s character and turn her into a feminist hero who never puts a foot wrong and takes down all the villainous men.  Instead, we learn that whilst her efforts should be applauded, there were disagreements behind the scenes.  The film’s most powerful scene occurs late in the film where she has a heart-to-heart with winner Jennifer Hosten and realises there are more issues at play.

That gets to the essence of what Misbehaviour is about.  On one hand, it’s an important history lesson to remind us of the limited life choices offered to women and people of colour in the 1960s.  On the other hand, it offers us a chance to reflect today, think about what more needs to be done, and remember that there isn’t a quick, easy fix to certain issues.  Featuring a slew of strong performances, it’s a film worth your time.