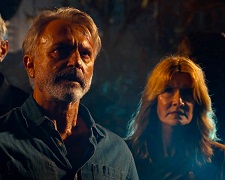 In 1989, acclaimed author Michael Crichton and his wife, Anne-Maree Martin, were expecting the birth of their first child.  Crichton bought a bunch of stuffed dinosaurs, popular with kids at the time, to help fill the nursery they were decorating at home.  To borrow from the lyrics of Kev Carmody – “from little things, big things grow.”  That seemingly innocuous purchase of plush toys served as the inspiration for Crichton’s famous novel, Jurassic Park, and it’s now spawned a movie franchise which has grossed over $5 billion at the international box-office.

As you will have seen from the trailers and other promotional material, Jurassic World Dominion represents a “coming together” of characters from previous movies.  The two stars of the 1993 original, Sam Neill and Laura Dern, interact with the two stars from the more recent flicks, Chris Pratt and Bryce Dallas Howard.  While it’s not a huge role, Jeff Goldblum also returns to offer humour, sarcasm and other light-hearted moments – “it’s always darkest just before eternal nothingness.”

Unlike the prehistoric creatures themselves, the screenwriters haven’t been too adventurous when it comes to the script.  It’s a seen-it-all-before tale where crazy scientists try to control/profit from the dinosaurs and, lo and behold, it all goes pear shaped.  Gasp, shock, horror – science ain’t always a great thing!  The keynote villain is the quirky Lewis Dodgson (Scott) who some will remember from the first movie.  He’s now the CEO of a leading pharmaceutical company who has bought the rights to the dinosaurs and is interested in them for one key reason – profit.

His latest cartoonish idea is to clone giant locusts which will eat the crops of all farmers who aren’t using grain seeds from his own company.  This will essentially allow him to control the world’s food supply.  Like a true movie villain, he may deep pockets, big dreams, and outlandish ideas… but he’s not as savvy when it comes to security services and competent henchmen.  This allows the heroes to infiltrate his laboratories and put an end to his devious, capitalist-driven plans.

There are several subplots to keep audiences interested and fill the lengthy 146-minute running time.  Using a classic technique, the characters split up and get their own separate mini adventure.  Parts are quite thrilling – like a moment where Bryce Dallas Howard’s character hides under water to evade a chasing dinosaur.  Other parts are frustrating contrived – like a scene where a pet raptor is rescued despite putting human lives at significant risk.

While the script needed improvement, it’s still nice to see Sam Neill, Laura Dern and Jeff Goldblum reprising roles for which they will always be famous for.  It’s been almost thirty years since the first movie and this new instalment does invoke a warm sense of nostalgia.  Oscar winning composer Michael Giacchino (Up) adds to that vibe by sneaking in John Williams’ familiar Jurassic Park score at timely intervals.

Jurassic World Dominion ticks a few boxes but not quite enough to make this a distinctive, original, memorable adventure.

You can read my chat with director Colin Trevorrow by clicking here.