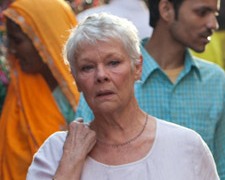 Put simply, The Best Exotic Marigold Hotel is an intertwined group of short stories about some elderly British folk who go on a holiday to India.  They’re all there for different reasons.  Muriel (Smith) needs a medical operation, Graham (Wilkinson) has gone in search of an old friend, Evelyn (Dench) is looking for fresh start, Madge (Imrie) seeks a wealthy husband, Norman (Pickup) is after romance and Douglas (Nighy) and Jean (Wilton) are simply on a holiday.

They’re all in for a surprise as the hotel looks nothing like the brochure.  It’s filthy!  Jean guests walks into their bedroom to find a flock of birds has made a home there.  Coupled with the fact that there are no other guests and the hotel is on the verge on financial ruin, it looks like being the trip from hell.

It takes a little while for them to size up the situation but in the end, they decide to make the most of it.  Well, that’s everyone except for Jean who refuses to leave the comfort of her hotel.  The rest discover some of India’s wonderful sights and interact with a few of the locals.  It gives them all a fresh perspective on what is a very interesting part of the world.

The film’s biggest asset is its stellar cast.  Bill Nighy, Judi Dench, Tom Wilkinson, Celia Imrie, Ronald Pickup and Penelope Wilton are all very good.  They don’t have the strongest of scripts to work with but they all generate the charm necessary to win the affections of the audience.

I haven’t mentioned Maggie Smith yet… but that’s because I wanted to single her out.  The 77-year-old was my pick of the cast as a politically incorrect woman who is slowly won over by the country’s culture.  You always know that’s going to happen but it’s the humour that Smith brings to the character that makes her so endearing.

Despite the strong performances, the film does feel stuffy with its forced, predictable storyline.  There’s not a lot of depth to any of the characters (most could be described as stereotypes) and the plot meanders along with few surprises.  I was also disappointed that we didn’t get to see more of the Indian landscape.  The characters talk about their amazing experiences but too much time is spent within the confines of the dingy hotel.

The forced ending didn’t win me over either.  I’ve nothing against happy, feel-good finales but considering the complicated lead up, it’s hard to believe some of the subplots resolve themselves so neatly.  It’s clear that director John Madden (Shakespeare In Love) wants us to leave the cinema with a smile on our face.  I personally think he’s tried a little too hard.