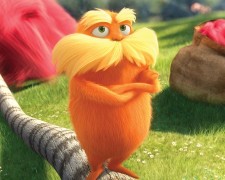 I went to the cinemas last night and hoped to see a great movie.

The Lorax, from the trailer, well it looked kind of groovy.

It’s set in a beautiful place where everyone seems happy.

They don’t realise they’re being controlled by a rather nasty chappie.

No one may leave as per his very strict orders.

A young lad named Ted has managed to sneak out however.

Sliding past the guards and hidden cameras, he is actually quite clever.

Ted’s trying to impress a girl and solve a puzzling mystery.

It seems the city has never planted any trees in its short history.

His journey takes him to a shabby looking house in a desolate location.

It’s home to a lonely stranger who isn’t too keen on visitation.

His name is the Once-ler and he has an important story to share.

Once upon a time, he had dreams of becoming a successful millionaire.

He cut down every tree in the forest and used them for his own financial gain.

But when it was all said and done, all he was left with was pain.

So who is this furry Lorax that is mentioned in the film’s title?

Voiced by Danny Devito, his character isn’t all that vital.

I’ve been disappointed with so many animated films over the past year.

They’re lacking in terms of adventure – of that I’m quite clear.

But the simplicity of this story left me scratching my head.

There are only a few laughs and the characters aren’t that exciting.

I much preferred Kung Fu Panda will all its action and fighting.

I confess that the huge U.S. box-office has left me somewhat confused.

Perhaps I’m off the mark and the reality is that others will be more enthused.

I’d love to say how amazing they are but meh, they’re only all right.

The Lorax is the fourth feature film to have come from a Dr Seuss book.

The Grinch Who Stole Christmas is my favourite and is well worth a look.

If you disagree with my opinion then I’m more than happy to discuss.

I’m sticking by my grading however – which I can now reveal is a C plus.