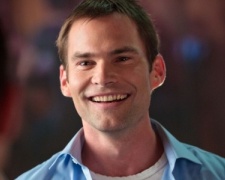 Thirteen years ago, if I mentioned the term “American Pie”, most would think of the 1971 folk song performed by Don McLean.  The beautiful lyrics recounted the plane crash that killed Buddy Holly, Ritchie Valens and The Big Bopper in 1959.  My dad played the song quite often and the chorus will be forever stuck in my head.

How times have changed.  Nowadays, “American Pie” is perhaps more widely known as a long-running and successful movie franchise aimed squarely at a younger crowd.  It all began with a nerdy guy in high school sticking his you-know-what into a warm apple pie.

The original (which made more than $100m at the box-office) was followed by two theatrical sequels and four direct-to-DVD releases.  I have to confess that I haven’t seen any of the direct-to-DVD stuff.  As the only person to feature in all of the movies, I asked Eugene Levy (aka Jim’s Dad) about the direct-to-DVD stuff and he admitted that he hasn’t seen them either!  It was a surprisingly honest answer.

Fans of the series will be happy to know that a little more effort has been put into American Pie: Reunion.  For starters, all of the original cast members have returned.  Perhaps they wanted to catch up and perhaps they needed the pay cheque.  I’m not too fazed.  Secondly, and most importantly, they’ve written a script.  It’s not the greatest but it will provide enough laughs for those who enjoyed the earlier films.

The title speaks for itself when it comes to the premise.  All the characters have returned to East Great Falls for their high school reunion.  They’ve flown into town a few days before the official reunion so they can spend time together and relive their fun-filled teenage years.  They’re all putting on a brave face… but we quickly learn that they haven’t moved on to bigger and better things.  Each of them has problems when it comes to love and/or work.

Don’t worry though.  This isn’t a depressing, brooding drama.  It’s filled with the same politically-incorrect humour that we’ve come to expect (like it or not) from the American Pie franchise.  The father-son chats between Eugene Levy and Jason Biggs will leave you cringing.  Sean William Scott (as Stifler) hasn’t changed at all and his relentless pursuit of the opposite sex will shock and offend.  A well-timed piece of nudity will also catch many off guard.

My thoughts on the film can be summed up using the metaphor of a high school reunion.  It was nice to catch up with these people but I grew tired in the later stages and remembered why we haven’t stayed in touch.  These characters didn’t have many exciting stories to tell and I was hoping for more from the screenplay as a whole.  The subplots involving Chris Klein, Mena Suvari, Thomas Ian Nicholas, Tara Reid and Eddie Kaye Thomas have little to offer.

It would appear this marks the end of the American Pie series and so I must finish on a positive note and say that it’s been a great ride.  I can still remember seeing the original back in 1999 and it inspired the name of my website – The Film Pie.  If only my site was as popular!

You can read my interview with star Eugene Levy by clicking here.