Review: Salmon Fishing In The Yemen 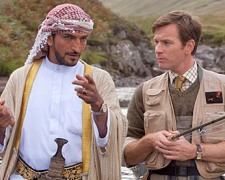 The Prime Minister’s Press Secretary, Patricia Maxwell (Thomas) is woken in the middle of the night with bad news coming out of Afghanistan.  There’s been a bombing at mosque and the negative press will only add further fuel to the debate that the UK should pull their troops out of the war.  She storms into the office the next morning and demands that her staff find a good news story from the Middle East to help push public sentiment in the other direction.

She stumbles across a very bizarre story.  A wealthy sheik (Waked) in Yemen is trying to introduce salmon fishing into his country.  He has hired a consultant with the curious name of Harriet Chetwode-Talbot (Blunt) to research its viability.  It leads Ms Chetwode-Talbot to the office of British fisheries expert Fred Jones (McGregor) but she doesn’t get the answer she was hoping for.  Mr Jones laughs at the absurdity of the idea and quickly shows her the door.

That’s not the end of it however.  The Prime Minister’s Office is keen for this to happen and still seeks the positive publicity (for reasons not made clear).  Money is no barrier for the sheik and Ms Chetwode-Talbot and Mr Jones are forced to team up and find a way forward.  Oh, and I should mention that a romantic connection develops between them.  Oh, and she also has a boyfriend who is in the army but he’s missing in action in the Middle East.

I know a few people who are fans of this film and they seemed to take it as a light hearted romantic comedy.  I saw things from different perspective.  In fact, I don’t know what the film wanted to be.  If it intended to be a rom-com, why did we need the moronic subplot involving Kristin Scott Thomas and the Prime Minister’s Office?  I’ve seen Bond villains that were more realistic and I hated her character from the opening scene.

There’s another poorly developed subplot involving that involves the sheik arguing with locals about his crazy proposal and preaching about the importance of faith.  It typifies the predictable, force-fed nature of the whole story.  It’s all black and white with no grey in between.

As for the romance… call me cold hearted but I didn’t buy into it either.  I had no issues with the charming Emily Blunt (The Devil Wears Prada) but I found Ewan McGregor’s character too nerdish and boring.  Could it have been improved with a different actor in the role?  I’m not entirely convinced but am leaning towards yes.

I can’t fault the pedigree of the filmmakers with Lasse Hallstrom (The Cider House Rules) sitting in the director’s chair and Simon Beaufoy (Slumdog Millionaire) responsible for the screenplay.  For whatever reason, they haven’t been up to the challenge of bringing Paul Torday’s novel to the big screen.  It’s silly, it’s corny and it’s not for me.