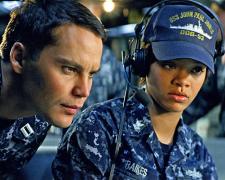 There’s a scene midway through Battleship where star Taylor Kitsch is looking at a dead alien that has been brought aboard his ship.  Another alien suddenly blasts through the cabin wall, picks up his compatriot and disappears into the distance.  Taylor turns and says “I’ve got a bad feeling about this.”

Several people in the audience started laughing.  Then others started laughing at those who were laughing.  The question I’m now asking myself – was this the intention of director Peter Berg?  Were we supposed to be entertained by the horrendously cheesy dialogue?  If so, couldn’t they have dusted off Arnold Schwarzenegger for the leading role and let us know from the outset that it’s a comedy?

For those interested, the wafer-thin premise revolves around Alex Hopper (Kitsch), an immature 26-year-old with a life that is going nowhere.  After he is arrested for drunkenly breaking into a convenience store, his older brother forces him to join the U.S. Navy.  You’d think the discipline would have done him some good but nope, that’s not the case.  He’s still a selfish individual who cares only for himself.

A few years pass and Alex somehow rises to the rank of lieutenant but it seems his time is finally up.  While out at sea on a routine exercise, he stupidly ends up in a bathroom brawl with a fellow officer.  Vice Admiral Shane (Neeson) has had enough and informs Alex that he’ll be sacked from the navy when they return to shore.  Oh and wait for this – Alex just so happens to be dating the Vice Admiral’s daughter (Decker) and was about to ask for her hand in marriage before things went pear shaped.

You can forget about the back story once the aliens arrive.  The script is thrown out the window and we’re treated to a mindless, trashy action-fest.  It’s like watching a video game.  Why are the aliens there?  What are they trying to communicate back home?  Why do they blow stuff up but choose not to kill certain humans?  Why do they have a weakness (which I won’t spoil) that makes no sense considering where they came from?  No answers are provided.

Through a series of convenient plot devices, the irresponsible Alex finds himself captaining the only naval ship that has a chance of defeating the aliens.  The world rests on his shoulders and you should have a fair idea about how it’ll pan out.

It’s been exploited time-and-time again but there’s still life in the “alien invasion” genre.  We’ve seen this in the past decade with great films such as Cloverfield, Super 8, Monsters, War Of The Worlds, District 9 and Signs.  They’re the pick of the bunch because of their intriguing stories and the fact they offer something a little different.

That’s not the case with Battleship.  There's nothing original in the script from brothers Jon and Erich Hoeber (Red) and they've failed to create any interesting characters despite a running time of more than two hours.  Further, many subplots are underdeveloped.  We are treated to obligatory scenes involving politicians / officials sitting around a table but for what purpose?  I’d say the same about the romance between Alex and the Vice Admiral’s daughter.

I consider this to be one of year’s worst but there are two positives worth mentioning.  In her acting debut, Rihanna’s strong, feisty performance as a weapons specialist shows her potential as an actor.  Equally impressive is Hamish Linklater (The New Adventures Of Old Christine) who provides the film with its only (intended) laughs as an insecure scientist.  These two characters are far more exciting that the dreary, monotone Taylor Kitsch (John Carter) and the surprisingly absent Liam Neeson (The Grey).

Battleship is being released in most of the major markets this weekend – here in Australia as well as in the United Kingdom, France, Germany and Japan.  Notice anything missing from that list?  Despite being a big Hollywood blockbuster with a $200m budget, the film isn’t being released in the United States and Canada for another 5 weeks.  If anyone can tell me why, I’m all ears.