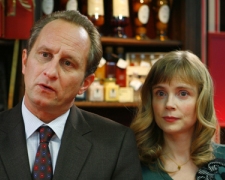 The French Film Festival recently wrapped its tour of Australia and now, as has become a tradition, a select few of the films will be released more widely across the country.  The beautiful Goodbye, First Love is already in cinemas and it has now been joined by Romantics Anonymous – ideal of those looking for a silly, light-hearted perspective on love.

Jean-René (Poelvoorde) is the hapless owner of a boutique chocolate-making business.  He believes in the delicious chocolate being produced in his small factory but it seems his customers do not.  They’re tired of the traditional offerings and sales are drying up.

The answer to his prayers is Angélique Delange, a young chocolatier (Carré) who turns up at the factory in response to a job offer.  She initially comes on board as a salesperson and tries to persuade retailers to stock the products from this ailing brand.  It turns out that she will be far more valuable than anyone realises.  Her creativity in the kitchen and her intimate knowledge of chocolate will create a new product line that may yet save the business.

It’s not going to be that easy however.  These two characters have fallen in love but have absolutely no idea how to express their feelings for each other.  Everyone around them can see what’s going on but Jean-René and Angélique refuse to open up.  He’s seeing a psychiatrist for advice and she’s attending a self-help group entitled Romantics Anonymous.  Put simply – they’re hopeless!

It’s a fairly simple story and the film clocks in at just 80 minutes.  The whole over-the-top nature of the scenario was fun for a while but it wears thin during the later stages.  It’s hard to sit there and watch them continually act like clueless morons.  Their ridiculous first date in a restaurant left me wondering if I was watching the dumbed down French equivalent of Curb Your Enthusiasm.

Whilst I hoped there would be a little more substance, I still found myself caught up in the charm of this farce.  Benoît Poelvoorde and Isabelle Carré deserve praise for their leading performances.  Their characters are completely neurotic and part of me wanted to get up and slap them across the face… but they’re hard not to like given their innocence and insecurities.

We all know what it’s like to fall in love – I just hope that we never have to make it this difficult for ourselves!