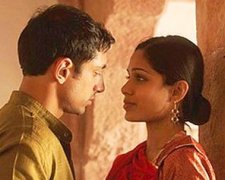 Trishna is a rather different adaptation of Thomas Hardy’s famous novel Tess of the d'Urbervilles.  Instead of being set in 19th century England, writer-director Michael Winterbottom (Welcome To Sarajevo) has shifted the story to 21st century India.

As our title character, Trishna (Pinto) is a young woman who still lives at home with her parents.  They come from a poor village in Rajasthan with her father working long hours as a delivery driver to help pay the bills and put food on the table.  When her father is badly injured in a car accident, Trishna realises that she must find employment to help her struggling family.

In a chance encounter at a party, she is befriended by a man named Jay (Ahmed).  He is comes from a completely different upbringing – one of wealth and privilege.  Smitten by the beautiful Trishna, Jay uses his influence and gets her a job at a posh hotel that he currently managing for his father.  It’s his not-so-subtle way of getting close to Trishna with the hopes of seducing her.

His plan works perfectly.  The two become quite close and eventually move to Mumbai.  After a nice set up, it is at this point where the film enters its darker, more confusing chapter.  Jay goes through a strange character transformation and becomes very controlling of Trishna.  It leads to a rushed series of events that confuse rather than enlighten.

There are some beautiful images of India but it’s the muddled storyline that lets the film down.  It’s a gutsy adaptation from Winterbottom but it feels like he’s trying too hard to fit Thomas Hardy’s novel into a modern day setting, particularly in the later stages.  You don’t get a clear sense of each character’s mindset and it lessens the film’s emotional impact.  Some of their actions are downright strange.

I admire Michael Winterbottom as a filmmaker but sadly, Trishna is not one of his works that I’ll be adding to my DVD collection anytime soon.