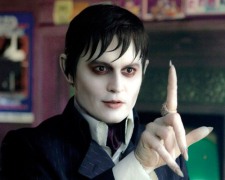 In the late 18th Century, the well-groomed Barnabas Collins (Depp) lived a happy life.  He was at the helm of a thriving seafood company, took up residence in a lavish mansion with more than 200 rooms, and was madly in love with a beautiful young woman.

One person was not happy with this scenario.  A vindictive witch by the name of Angelique Bouchard (Green) had tried hard to win Barnabas’s affections without success.  Fuelled by jealousy, she turned him into a vampire and had him locked in an iron coffin buried deep beneath the ground.

We leapfrog to the year 1972 and having spent almost two centuries locked up, Barnabas’s coffin is uncovered by a construction crew.  He’s grateful to his saviours but as you imagine, he’s a little hungry and so drinks every last ounce of blood from their bodies.

Barnabas would like to slide back into his previous lifestyle but it won’t be that easy.  For starters, he has to grabble with all the modern technology.  We’re talking about everything from cars and paved roads to music and record players.  Further, his once profitable seafood enterprise has seen its market share stolen by a new player – Angel Bay Seafood.

Barnabas’s problems don’t end there.  It turns out the witch Angelique is still alive.  She hasn’t aged a day and despite her bitterness, her heart still yearns for Barnabas.  She again tries to seduce him but Barnabas isn’t about to make the same mistakes this time around…

Perhaps my expectations were misaligned but I was disappointed by Dark Shadows.  The lure of director Tim Burton and a half-decent trailer had me thinking this would be a sharp, witty black comedy.  Sadly, that wasn’t the case.  There were only a handful of genuine laughs… and that puts it on a par with Scary Movie 3.

The film gets too bogged down with lengthy dialogue-driven sequences.  Knowing that Burton is sitting in the director’s chair, you keep thinking they’re going to lead up to something clever but that’s rarely the case.  Instead, we're left with dumb jokes highlighted by a scene where Barnabas pulls out the back of the television set and tries to comprehend how there are small people inside.  It was like watching Mel Brooks’ awful 1995 comedy Dracula: Dead And Loving It.

The screenplay doesn’t help his cause but Johnny Depp’s isn’t too bad as Barnabas Collins.  We’ve seen this melancholic persona from him many times before but he still gives his character a little flavour.  It’s a shame the rest of the talented cast are so underutilised.  Michelle Pfeiffer, Jackie Earle Haley, Helena Bonham-Carter and Chloe Grace Moretz are pushed too far into the background and contribute little to the overall story.  Deserving of praise are the gifted set decorators and make up artists who have helped bring this world to life.

I confess to not having seen any of the 1960s television series on which the film is based.  Perhaps it may explain some of the gaps in the story such as how Barnabas developed hypnotic powers and how he can’t see himself in the mirror.  I’m also unclear about the “ghost” in the film and what purpose she serves.  It felt like we were only given part of the story.

I’ve only seen two decent Tim Burton flicks over the past decade (Big Fish, Corpse Bride) and his strike rate has not improved with Dark Shadows.