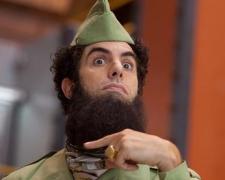 When on Twitter, I’m generally polite and do everything possible to avoid conflict.  For that reason, you’ll never see me talking about politics and religion.  It’s not that I don’t have an opinion.  It’s just that we live in a world of political correctness where things can easily be misinterpreted.  I’d rather have a friendly debate with someone in person than “have it out” while protected by the walls of cyberspace.

Perhaps it’s for this reason that I enjoy the comedic style of Sacha Baron Cohen.  He’s the exact opposite in the sense that he’s doing everything possible to shock and offend.  There’s seemingly no topic too sensitive for him to mock.  He’s thrown the handbook on political correctness out the window and you know what?  It’s refreshing.

He played a dim-witted Kazakhstani journalist in Borat and a gay Austrian fashion designer in Bruno.  This time around, Cohen has moved himself higher up society’s hierarchy and plays an oppressive dictator from the North African country of Wadiya.  His name is Admiral General Aladeen and those found disagreeing with his opinions are likely to find themselves executed.

Aladeen is your stereotypical dictator (if there is such a thing).  He hates the United Nations and has a secret factory that develops nuclear weapons.  He lives in a ridiculously lavish palace adorned with paintings and statues.  He despises women and laughs at their efforts to gain equality.  He has a huge army at his disposal and they’re all prepared to die to protect their revered leader.

Threatened with financial sanctions imposed by the international community, Aladeen goes on the front foot and accepts an offer to speak at the United Nations headquarters in New York City.  What he doesn’t realise is that it’s an elaborate conspiracy concocted by his right-hand man, Tamir (Kingsley), to have him removed from power.  Tamir arranges for Aladeen to be taken captive by an overly patriotic American torture expert (Reilly) and brings in a hapless body douple so that no one is the wiser.

The real Aladeen manages to escape but with his beard now shaven, he is unrecognisable to all who knew him.  He needs to find a way to reclaim his identity, sneak back into the heavily guarded hotel and deliver another passionate speech in defence of his dictatorship.  He will be helped by a naive organic food store owner (Faris) who has no idea what she’s getting herself into.

If you’re not a fan of Cohen’s comedy, you’re entitled to that opinion and you should do everything necessary to avoid The Dictator.  I know quite a few people who would be appalled by the jokes regarding the 9/11 terrorist attacks and the 1972 Munich Olympic Games massacre.  There’s even a reference to 14-year-old boys which… yeah… I probably won’t say anything more about that.

It’s easy to forget that Borat was nominated for best adapted screenplay at the 2007 Academy Awards.  It highlights that whilst Cohen’s humour is crass, there is often an intelligent, underlying subtext.  That’s again the case here but admittedly to a lesser extent than Borat and Bruno.  There’s a terrific monologue from Cohen late in the movie which is provides the clear high point.  It’s just a shame we didn’t see more of this.

The topic is rife for a spoof and it’s obvious the script has been inspired by the likes of Muammar Gaddafi and Kim Jong-Il (to whom the film is dedicated).  While acknowledging that some of the film’s individual scenes are quite funny, the overarching story needed work.  Anna Faris’s character is too stupid and the scheme involving Ben Kingsley and the oil companies required more development.

The Dictator is amusing but it had the potential for so much more.  If you disagree, you can argue with me on Twitter.  Hang on.  Better not.