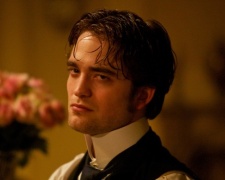 It’s hard to watch this film and NOT think about Robert Pattison as the sparkly vampire from the Twilight franchise.  It’s the role that he will always be most known for.  I’m stating the obvious here… but the tricky part for Pattinson is trying build on that popularity and forging a long-term career as a serious actor.  Can he dispel the naysayers?

Bel Ami is an important diversion for Pattinson as it’s the first time he’s played a not-so-nice character.  The story is set in Paris in the late 19th Century and when we first meet the young Georges Duroy (Pattinson), he’s just returned from a lengthy stint with the French army in Algeria.  He has no money to his name and is in desperate need of employment.

Despite his current predicaments, Duroy still has lofty ambitions.  He wants to weave his way into high society and become a man of wealth and influence.  After bumping into an old military friend, Duroy is invited to a small dinner party where he receives a piece of advice that will forever shape his life.  The secret to success is not building relationships with successful businessmen.  Rather, Duroy should befriend their wives and mistresses – the people behind the scenes who hold the real “power”.

It’s a mantra by which Duroy subsequently lives his life.  He hones his skills and uses his good looks to seduce a series of married women.  It helps land him a job as a journalist with a leading Parisian newspaper.  They want him to write about his experiences during the war in Algeria to help influence public sentiment and start a backlash against the government.

Duroy is an intriguing individual.  I won’t spoil too much but he is prepared to squash a lot of people in his ascension up the social ladder.  There’s nothing wrong with having a little ambition but can his actions be justified?  Will you think they are acceptable under the rationale that we live in a “dog eat dog” world?  Or will you see him as a borderline-psychopath who shows no consideration to anyone but himself?

It’s an interesting premise but sadly, Bel Ami is a film that underachieves.  I found it a continual struggle to understand the mindset of each character.  The way in which Madeleine Forestier (Thurman) was so easily charmed by Georges was particularly puzzling given her intelligence and some of her comments early on.

Further, the film’s political themes are not explored in enough depth.  There is a move to unseat the government due to their involvement in the war but this element of the story, whilst important, plays second fiddle to Georges Duroy and his womanising.

If we look past the final Twilight film, Robert Pattinson will next be seen in Cosmopolis -  a David Cronenberg thriller about a day in the life of a 28-year-old billionaire asset manager living in New York City.  Now that sounds like a film I’d rather see.