Review: What To Expect When You're Expecting 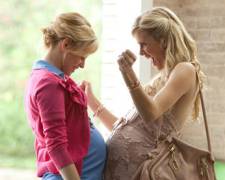 You can forget the classic literary works of William Shakespare, Charles Dickens and Jane Austen.  They’ve been “done to death” on the big screen.  The time has come for us to take self-help books and bring them to life through the magic of cinema.  Hopefully someone picks up the rights to Internet For Dummies but in the meantime, we’ll have to make do with What To Expect When You’re Expecting.

The film is “based” on the widely read pregnancy guide from Heidi Murkoff, first published back in 1984.  The book has no narrative.  Rather, it contains a series of questions and answers on what a woman can expect while going through each month of the pregnancy.  Don’t ask me how but screenwriters Shauna Cross and Heather Hach have crafted a series of fictional characters from the book’s pages for the purposes of the movie.

Jules (Diaz) is the host of a reality television show who is trying to maintain her work life throughout the pregnancy.  Wendy (Banks) is the owner of a baby store and has a mood swing every hour.  Rosie’s (Kendrick) pregnancy was an accident and she’s not sure what to do about it.  Skyler (Deckler) is happy-go-lucky despite the fact she’s having twins.  Holly (Lopez) is the only woman who isn’t pregnant but that’s because she’s on the verge of adopting a baby from a third world country.

There’s one reason you should see this film and that’s Ms Elizabeth Banks.  She’s as over-the-top as everyone else in this ensemble but she has a fun, endearing personality that won me over.  There’s a great scene late in the film where she tries to explain the “wonders” of pregnancy to a sizeable audience at a baby convention.

As for everyone else, I wasn’t impressed.  It’s like watching a dumber version of Sex & The City (and yes, I am a fan of the TV show, not the movies).  These women have nothing that interesting to offer and their husbands are just as dull.  The most ridiculous characters are a group of men (led by Chris Rock) who walk their babies in the park and are forever complaining.  The highlight of their day is when their bump into their hunky, well-travelled friend and salivate over his bachelor lifestyle.  It’s so silly.

Worst of all, the writers have tried to weave in a few moments of unexpected drama into what is largely a comedy.  It doesn’t work and these particular scenes are far too rushed.  They needed to be developed in much more detail (to give the audience a chance to feel some kind of emotion) or scrapped all together.

We all know that I’m not the target audience for such a film so take my opinion for what it’s worth.  What To Expect When You’re Expecting is pretty much what I expected.  In other words, it’s not good.