Review: Get The Gringo 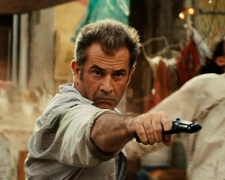 We begin with two clowns in a get-away car trying to evade the cops on a long stretch of highway.  I use the term “clowns” both physically and metaphorically.  Yes, they are indeed dressed as clowns.  It was their costume as part of a daring robbery that helped net them a few large bags filled with cash.

The fact that they’re about to be caught is the other reason why the word “clown” feels appropriate.  In a final act of desperation, they try to drive their car through a thin wall that separates the United States and Mexico.  There’s no creative twist here.  This isn’t The Fast & The Furious where they’ll smash through and zoom off into the sunset.  Rather, the car flips and lands as a crumpled mess, a few metres into Mexican territory.

One of the robbers is dead.  The other wishes he was.  It’s at this part of the review where I’d go through the simple formality of telling you his name… but we never actually find out.  He uses a variety of alias such as Richard Johnson and Reginald T. Barnes.  We all know he’s Mel Gibson though so let’s just call him that to keep things simple.

Anyway, the corrupt Mexican police officers take the stolen money (which adds up to just over $2m) and throw Mel in a filthy local prison.  This isn’t your ordinary, every day prison.  You’re not locked up in a cell and fed three square meals a day.  It’s like a mini-city surrounded by high walls and barbed-wire fences.  You have to find a place to sleep and a way to make a living.  If you don’t… or if you get on the wrong side of the wealthy gangs… you’re unlike to last more than a few days.

Mel Gibson’s had a long and successful career but I’m not too sure about this film choice.  He’s trying to play some kind of mix between a humorous action hero and a soft-hearted family fan.  He kills an array of “bad guys” inside the prison whilst also befriending a widowed mother (Sisniega) and her 10-year-old son (Hernandez).

There’s not a lot more to the plot but that’s a moot point given this is a mindless action film.  Never at any time does it purport to be anything else.  There are shoot outs, explosions and an occasional laugh.  I must confess that the last scene in the film did leave me smiling.

My major grievance is that Gibson doesn’t fit this character and he’s looking tired at the age of 56.  The lead role didn’t necessarily require someone younger but it needed an actor with more flair and charisma.  I’d much rather watch 66-year-old Danny Trejo in Robert Rodriguez’s 2010 action classic Machete.  Do rent that film if you haven’t already seen it!

An actor other Gibson was always unlikely though given he co-wrote the screenplay and funded the film himself.  He pumped $20m into the production and in an interesting move, chose not to release in the movie in U.S. cinemas.  Instead, the film was released through a video-on-demand service that the public could access from the comfort of their lounge rooms at a cost of just $10.99.  Will we see more of this in the near future?  That’s a topic more worthy of discussion than Get The Gringo.