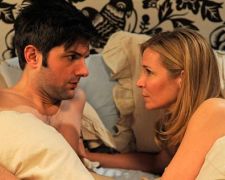 Anyone who tries to craft an intelligent romantic comedy deserves points in my book.  It’s a genre I’ve grown to loathe but that’s because so many films can be classified as cheesy, predictable and unrealistic.

Just over a decade ago, actor-writer Jennifer Westfeldt adapted her own play and brought it to the big screen.  Kissing Jessica Stein was one of favourite movies of 2002 and focused on a woman who could never find the right guy because of her incredibly high standards.  In the end, she tries something completely different… and starts dating another woman.  It reminded me of a witty Woody Allen flick and was filled with sharp dialogue and unconventional moments.

When the program was released for last year’s Toronto Film Festival, one of the first films that I added to my “must see” list was Friends With Kids.  It marked the return of Westfeldt as a writer but also saw her take on a new challenge by sitting in the director’s chair for the first time.

The broad premise is nothing new.  Last year, we saw two comedies explore the idea of best friends have a relationship based purely on sex – Friends With Benefits and No Strings Attached.  Friends With Kids takes it a step further however.

Julie (Westfeldt) is in her mid-30s and, unable to find the perfect guy, is worried that the opportunity to have kids is slipping away.  It takes some debating but she ultimately comes to an understanding with her long-time friend, Jason (Scott).  They agree to have a child together whilst not actually engaging in a relationship.  It’ll take the pressure of Julie and she won’t have to worry about diving in too quickly with the wrong guy, for the sole reason that she wants a baby.

Ground rules are laid down with both Julie and Jason free to date whoever they want.  The parental responsibilities will be shared and in Jason’s words – he’ll “be 100% committed to this, half the time”.  It’s an interesting plan but as you can imagine, it won’t be simplest of social experiments.  Two couples who they regularly hang out with (played by Wiig, Hamm, Rudolph and O’Dowd) have serious doubts about the idea but prefer to gossip amongst themselves instead of publicly airing their concerns.

Following the traditional storytelling arc, a few spanners are thrown into the mix during the second act.  Julie and Jason both start dating.  She’s going out with Kurt (Burns), a divorced construction worker with kids of his own.  He’s going out with Mary Jane (Fox), a career-driven dancer who has no desire to have children.  Things are about to very complicated.

You’ll always have a sense where the story is going but there’s a lot to like about Friends With Kids.  The whole concept of “children first, relationship second” should provide some entertaining post-film discussion with your own friends.  Westfeldt explores both the positives and negatives of this argument through her sharply written screenplay.

The strong cast is also a testament to the material.  It’s no surprise to see Mad Men’s Jon Hamm (since he and Westfeldt have been dating for many years) but the list also includes three actors backing up from Bridesmaids - Kristen Wiig, Maya Rudolph and Chris O’Dowd.  It’s just a shame some of these supporting players don’t get more screen time.  Getting the best of the laughs is the underrated Adam Scott who as Jason, is never afraid to share what’s on his mind.

Last week in Australia, we were “treated” to What To Expect When You’re Expecting – a silly, shallow rom-com that looked at the trials and tribulations of pregnant women.  Offering more insight and digging much deeper into its characters, Friends With Kids is clearly a better film.  Do see it.