Review: The Cabin In The Woods 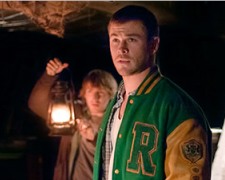 I first heard about The Cabin In The Woods back in March.  It was generating serious buzz but many people were throwing out the warning message – make sure someone doesn’t spoil it before you see it.  Immediately, I was intrigued.  It brought back memories of films from the 1990s like The Crying Game, The Usual Suspects and The Sixth Sense.  Who doesn’t enjoy a good twist?

Of course, it was a lot easier to avoid spoilers back in the 1990s.  You certainly didn’t have to worry about social media.  It’d take you 15 minutes just to download a pixelated version of the trailer through your painfully slow dial-up internet connection.

That’s not the case now though.  Every time I’d seen a mention of The Cabin In The Woods in my Twitter feed, I’d quickly go to my “glazed eyes” look.  There was no chance that I’d be clicking on links to any reviews, articles or trailers.  Perhaps they were “spoiler free” but I didn’t care.  When a film relies heavily on surprises, you don’t want it being ruined.

Things started to get really messy in mid April.  The film was released widely in the United States and opened with a respectable $14.7m at the box-office.  Many here in Australia were putting the obvious question to Roadshow Films – why are you waiting until July to release the movie in this country?  With spoilers now all over the web, why not show it now and capitalise on the U.S. publicity?  It’d had reached the point where an online petition had been created to put pressure on the distributor.

What happened next was completely unexpected.   Instead of bringing the release date forward, Roadshow announced that they weren’t releasing it at all!  It would be going straight to DVD.  What the hell was going on?  A film that (1) had been profitable in the United States, (2) had overwhelmingly positive reviews from critics, (3) had been co-written by Joss Whedon (The Avengers), and (4) had an Aussie in a leading role (Chris Hemsworth) was going to bypass Australian cinemas.  Filmgoers were getting angry.  Those that had seen The Lucky One and The Five-Year Engagement were even angrier!

We all know there’s a happy ending to this tale.  The fact that I’m sitting here and writing this review is proof of that.  Roadshow buckled.  In early May, they put out a press release stating the film would receive a small release in Sydney and Melbourne in June.  It still wasn’t good enough.  After more pressure, cinemas in Brisbane, Adelaide and Perth announced that they too would be screening the movie.

We often hear about the dark side of social media but here’s a great instance where the “power of the people” have produced a positive outcome.  This movie deserves to be seen in a darkened theatre with a decent-sized audience.  That was my experience when I caught it at the Gold Coast Film Festival.  If you’re up for a horror-thriller that doesn’t always follow a predictable formula, make sure you don’t miss it.

I personally wouldn’t consider it a game-changer but The Cabin In The Woods kept me on my toes and has many interesting elements.  Perhaps it's been a little over-hyped.  It’s good but not great.  The movie marks the directorial debut of Drew Goddard (writer of Cloverfield and the TV series Lost) and was filmed way back in 2009.  Financial difficulties within MGM saw it sit on the shelf for close to two years and it was ultimately sold to Lionsgate in mid 2011 for the cheap price of $12m.  A great buy.

Lionsgate wasn’t the only big winner.  He didn’t know it at the time but it turned out to be a life-changing role for Australian Chris Hemsworth.  Writer Joss Whedon, impressed with his performance, recommended him to Kenneth Branagh for the lead role in Thor.  The rest is history.

I’ve written 650 words and am yet to mention the plot.  That’s no accident.  I think I’ve made it clear that the less you know about this film, the better.  A group of five college students go on holidays to a remote cabin in the woods.  Some stuff happens.  Then some other stuff happens.  What more do you want?  The end.