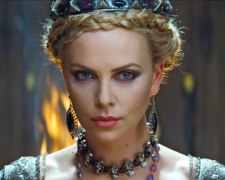 “Let’s take the Snow White story, increase the focus on the evil Queen and turn it into a big budget Hollywood blockbuster.”  I’m not sure how… but two different groups of people came up with that same idea.  Mirror Mirror was released back in March and tried to add a comedic touch to the fairy tale from the Brothers Grimm.  I wasn’t a huge fan of movie but it did have a few positive qualities.

Snow White & The Huntsman is by far a better film.  It’s taken the famous tale of Snow White and transformed it into an epic adventure.  It’s not quite in the same company but the film reminded me of The Lord Of The Rings trilogy with its medieval appearance and magical flavour.

We begin with a brief introduction.  For many years, Snow White (Stewart) has been kept locked up in a very tall tower.  It is closely guarded and her only view of the outside world is through a small window.  She was placed there by her villainous step-mother, Queen Ravenna (Theron), who killed Snow’s White father and seized control of the kingdom.

Guided by her famous mirror, Queen Ravenna learns that she can achieve immortality if she kills Snow White and consumes her heart.  Unfortunately, she won’t get that chance.  Snow White seizes on an opportunity, escapes from the castle and flees into the mysterious Dark Forest.

Suffice to say that Queen Ravenna isn’t particularly happy when she hears this news.  It’s great watching her get angry and the versatile Charlize Theron (Monster, Young Adult) was a terrific casting decision.  She breathes life into the character and it’s kind of ironic that she does this by sucking the life out of others.

Blinded with rage, the Queen recruits a strong huntsman (Hemsworth) to head into the Dark Forest and capture Snow White.  It’s at this point where the film’s spotlight moves away from Queen Ravenna and starts shining on the vulnerable Snow White.  She meets an assortment of people within the forest and they provide valuable guidance in her quest to defeat the Queen and take her crown.

This is certainly a big step up for director Rupert Sanders.  He’s forged a successful career making award-winning television commercials but taking on a $170m production as your first feature film?  Now that’s a gutsy move!

The faith shown by Universal Studios has paid off because Snow White & The Huntsman excels in terms of its production values.  The sets look amazing and it seems no expense has been spared by Academy Award winning costume designer Colleen Atwood (Memoirs Of A Geisha, Alice In Wonderland).  James Newton Howard’s strong music score only further adds to the film’s “epic” nature.

It’s clear that a lot of thought has gone into the look of this fantasy world.  I speak of everything from the unusual mirror in the Queen’s bed chamber to the beautiful butterflies within the forest.  Some of the “camera trickery” involving the dwarves is a little obvious but on the whole, I’m impressed with what Sanders has been able to achieve.  Oh, and I’m no longer a Kristen Stewart naysayer.  I’ve been critical of her in the recent Twilight flicks but this is role that suits.

The film has been rated M in Australia and while it has arrived in time for the school holidays, I’d suggest the battle sequences make it unsuitable for young children.  For everyone else however, Snow White & The Huntsman is a satisfying start to what may become a long-running series.

You can read by chat with director Rupert Sanders by clicking here.