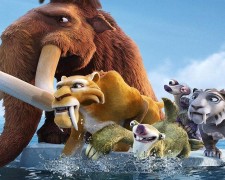 You wouldn’t put them in the upper echelon of the animated film world but the Ice Age flicks have been fun.  They’re simple crowd-pleasers aimed at a young audience with a cute assortment of creatures.  There’s Ray Romano as the level-headed mammoth, Denis Leary as the not-so-ferocious tiger and John Leguizamo as the clumsy sloth.  Let’s not forget the tiny squirrel who is forever trying to get his hands on an acorn.

I hate to be the one to break it to everyone… but it’s time these animals were put to sleep.  Their best days are now behind them.  There’s no need to shed any tears though.  Trust me, they won’t feel a thing.  We’ll just do the humane thing and stop making more Ice Age movies.

It’s the wafer thin premise in Continental Drift that has led me to this conclusion.  It begins with Manny the mammoth being separated from his family after an unexpected earthquake.  It has left him stranded on a tiny iceberg with Diego the tiger and Sid the sloth.  They’re joined by a new addition to the series – Sid’s feisty grandmother (Sykes) who pretty much does as she pleases.

They’re all desperate to return home but the iceberg keeps drifting further and further from the mainland.  Hope seems to have arrived when they encounter a large ship but lo and behold, it is controlled a group of pirates.  They are led by Captain Gutt (Dinklage), a villainous ape who is not renowned for showing mercy.

What follows is a silly adventure where our beloved creatures try to evade the pirates and find a way back home.  Things work out far too easily for these characters and as a result, there’s very little excitement or tension.  Every now and again, we cross back to the mainland for an even weaker subplot involving Manny’s wife and daughter who are having problems of their own.

A handful of moments left me chuckling but for the most part, this is a ho-hum film-going experience.  It’s hard to be too critical of something targeted at the family audience but when you compare it to last week’s Brave, a film with beautiful animation and a strong storyline, you’ll realise there are far better alternatives.

As a positive, those that see Ice Age 4: Continental Drift in cinemas will be treated to a 4-minute short film beforehand.  It’s a quick 3D Simpsons episode that revolves around Maggie trying to evade her arch rival, Baby Gerald, at the Ayn Rand School For Tots.  There isn’t a single piece of dialogue (must have allowed 20th Century Fox to save on the voice costs) but it’s cute and I’m sure that fans of The Simpsons will find it amusing.