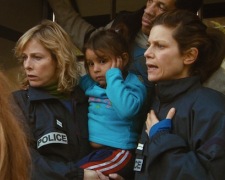 Polisse is a French drama that takes us inside the lives of those who work for the Children Protection Unit (CPU) in Paris.  We learn from the opening titles that these are fictional characters but the stories themselves are based on actual events.

Above all else, it’s an eye-opening film.  We see plenty of movies and TV shows focusing on police officers and their exciting adventures.  I’m not revealing anything new when I say that these films and programs tend to glamorise reality.

That’s not the case here.  Well, at least I don’t think so.  Polisse is shot like a documentary and this style gives it a huge dose of authenticity.  It feels like we’re just sitting in the corner of the room, watching these people go about their daily lives and eavesdropping on their conversations.  They’re an interesting bunch and you’ll quickly grow to like them.

Writer-director Maïwenn has covered a lot of material within the two hours duration.  For starters, we observe these officers in their professional setting.  They interview a father who has been accused of sexually abusing his daughter.  They go in search of a drug-addicted mother who has kidnapped her daughter from a child care centre.  They try to help a homeless mother who cannot care for her young son.

Just as enlightening is the perspective offered on the personal lives of these characters.  Child protection is a challenging profession and many of these officers have trouble “leaving their work at home”.  It’s not easy to spend your day interrogating an accused rapist and then coming home to relax on the couch with your partner.

It’s a subject matter that many filmgoers will find confronting but, for use of a better word, I “enjoyed” Polisse.  It’s an affecting film that’s has stuck with me since I left the theatre.  I’m guessing the jury at last year’s Cannes Film Festival had similar thoughts.  The movie took third place honours in the official competition (winning the Jury Prize) behind The Tree Of Life and Once Upon A Time In Anatolia.

My only criticism is that the film covers too many case files.  We’ll spend a few minutes listening to a person being interrogated and then not see them again for the rest of the movie.  A part of me wanted to know more and I’d have preferred an approach that is less fragmented and focuses more on certain individuals.

Building on the strong word of mouth from its screenings at the Melbourne, Brisbane and Sydney Film Festivals, Polisse is now getting a limited release in Australian cinemas.  Make time for it.