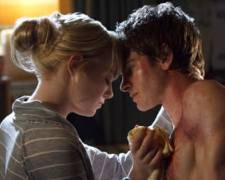 If your computer starts having problems, what’s the first thing you should do?  Don’t worry, this isn’t a trick question.  You’d see it being asked at the $100 mark on Who Wants To Be A Millionaire.  The answer is to simply shutdown and reboot.  It doesn’t always work… but I’m surprised by how often it does make a difference.

It’s a practice that has now been whole-heartedly adopted within the film industry.  If a long-running series is showing signs of weakness, you don’t send it to the scrap heap.  You just shut it down, wait a little while and press “reboot”.  As we’ve seen with the Batman and Star Trek franchises, a fresh cast and a new director will lure the paying public back into theatres.

I say this often but I’m tiring of the lack of originality coming out of Hollywood and the frustrating trend towards sequels, prequels, remakes and reboots.  Films like Inception (my favourite of the past few years) are few and far between.  You’d be amazed to learn how many reboots are currently in production.  Brace yourself for new versions of Superman, Total Recall, Judge Dredd, Highlander, Robocop, Teenage Mutant Ninja Turtles, Starship Troopers and Godzilla.

I should get to the point and talk about the latest blockbuster reboot - The Amazing Spider-Man.  It’s a gamble for Sony Pictures in the sense that the previous Spider-Man series is still warm it its grave.  It was only ten years ago that we saw Tobey Maguire slip into his spidey-suit, hang upside down from a building and kiss the lips of Kirsten Dunst.  Do filmgoers want to see the “how did he become Spider-Man” story all over again?

Fresh off his superb performance in The Social Network, Andrew Garfield takes on the role of Peter Parker and transforms him into an extremely likeable superhero.  He’s never overconfident or preachy – he’s just a quiet, introverted guy with a wry sense of humour.  More importantly, he’s vulnerable.  Spider-Man isn’t a “perfect” superhero who can foresee every event and is never injured.  He has weaknesses and we see these through Garfield’s terrific performance.

The best moments in the film are easy to categorise – those where Andrew Garfield interacts with Emma Stone.  She’s one of the best young actresses working today (The Help, Easy A) and she can do no wrong in my eyes!  As Gwen Stacy, she’s more than Peter Parker’s naive love interest.  She’s an assertive, intelligent woman who can quickly size up any situation.  There’s an amusing scene on the rooftop of her parent’s apartment building where the two express their feelings for the first time (don’t worry, it’s not mushy).

What stops The Amazing Spider-Man from being a “great” film is the jumbled script.  For starters, we never get a clear perspective of the public’s feelings about Spider-Man.  This was achieved in the earlier movie by having Peter Parker work for the influential editor of a major newspaper.  That’s not the case this time around and we really only see things from the one-eyed viewpoint of the police chief (Denis Leary).

The villain is also a letdown.  Rhys Ifans plays Dr Curt Connors, a gifted scientist who is trying to develop a revolutionary drug that will allow humans to regenerate missing limbs.  It all goes wrong when he tries the serum on himself and turns into a giant lizard.  The problem is that we never really understand Connors and why he suddenly becomes so intent on world destruction.

Director Marc Webb (500 Days Of Summer) provides a solid action finale that looks great against the backdrop of the beautiful New York City landscape.  It’s just a shame things fall into place too easily.  How did no one manage to take a photo of the lizard while it was on the bridge?  Why was a 17-year-old intern given full security access to the laboratory?  How did all of those cranes (and drivers) happen to be in the right place at the right time?

Adding it all up, the positives outweigh the negatives with The Amazing Spider-Man (although it was a close call).  The intoxicating charm of Andrew Garfield and Emma Stone will distract audiences from the muddled screenplay.  Is it as good as the first film in the previous Spider-Man series?  I don’t think so.