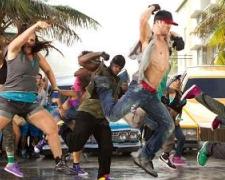 Step Up 4: Miami Heat makes no sense. I mean NO SENSE.  That said, should we expect anything different from a dance movie?  We all know what’s going to happen anyway.  The only reason people watch movies within this formulaic genre is to enjoy the well-choreographed dance numbers.  On that note, this film delivers.

The story centres on a guy named Sean (Guzman) who is looking to take off his shirt at any opportunity.  Being the leader of a dance crew allows him to do just that.  The whole group yearns to break into the industry and their sights are set on a competition being hosted by Youtube.  Dance groups from around the world are uploading their best material and the first team to reach 10 million hits wins a $100,000 prize.

The whole idea didn’t seem to add up.  There’d be roughly 15 regular members in the group and when split, I don’t think $100,000 was going to take them very far.  They also appeared to be spending quite a lot to set up their elaborate dances (lights, cars, audio equipment, floating money).  Perhaps they needed an accountant on their crew.

In honour of their style of dance, they call themselves “The Mob”.  They show up in public places and put on an elaborate, well-rehearsed display.  The film opens with them stopping traffic on a busy street in downtown Miami and dancing on the rooftops of the trapped cars.  A camera guru films their work and they dash off before the police arrive.

These “flash mob” dances are easily the best part of the movie and thankfully, there are lots of them.  They're highlighted by a cool sequence inside an art gallery that makes great use of light.  It’s one of those rare moments where you can say the 3D effects substantially enhance the experience.  There’s another great scene in the bottom of an office building.

There needs to be some kind of conflict in the story and this comes in the form of a greedy property developer played by Peter Gallagher (who deserves better roles than this).  He wants to redevelop a prime piece of real estate by the ocean and in doing so, demolish the homes of the poor residents who have lived in the area for decades.

It’s at this point where the film’s message comes through loud and clear.  If you’re not happy with the government or a big, nasty corporation, you can change their opinions through the power of dance!  Yes, I am referring to “protest dancing”.  I’m guessing it’s a relatively new concept.  This crew turn up at important business meetings and put on a memorable, show-stopping dance number.  Their goal is to disrupt the approval for the development and bring media attention to the issue.

I should also mention that the Mr Greedy Property Developer has a daughter named Emily (McComick) who just so happens to be a dancer.  Guess what?  She’s fallen in love with Sean, has joined his group and is now secretly “protest dancing” against her own father.  Gasp!  Shock!  Horror!

Movies don’t get much trashier than this… and it was good fun.