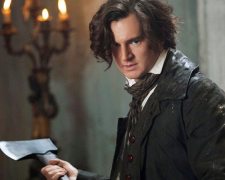 Abraham Lincoln was the 16th President of the United States.  Abraham Lincoln guided his country through the American Civil War.  Abraham Lincoln was assassinated by John Wilkes Booth while attending a play at Ford’s Theatre.  All of these are well known facts.  They can found through any simple internet search (if you didn’t already learn them at high school).

It’s about time that someone set the record straight though.  36-year-old author Seth Grahame-Smith has done his research and finally exposed the truth.  It turns out that Abe was actually a vampire hunter in his spare time.  His mother was actually killed by one of these blood-thirsty creatures and his motive was always one of revenge.

Abraham Lincoln: Vampire Hunter deserves points for at least attempting to be different.  There seem to be so many vampire flicks churned out every year but this one has an element of creativity by taking historical characters and throwing them into this fantasy world.  Those familiar with American history will smirk at the interesting “spin” put on certain events (such as the Battle of Gettysburg).

For this reason, the film held my attention.  I was always curious to see where they’d take the story next.  On the downside, there isn’t enough humour.  Relative newcomer Benjamin Walker has been cast as Lincoln and is much too serious in the leading role.  If you’re going to use such a farcical storyline, you have to make people laugh!

The film’s biggest weakness is its action.  Russian born director Timur Bekmambetov (Night Watch, Wanted) has relied heavily on visual effects and we’re left with images that feel like they’re from a computer game.  They create no suspense and at times, you can’t even tell what’s going on.  Further, it seems nothing has been shot at a regular speed.  There’s slo-mo, then fast-mo, then slo-mo, then fast-mo, then slo-mo…

The idea has been floated but I’m not sure if Seth Grahame-Smith’s other popular novel will make it to the big screen.  I’m referring to Pride & Prejudice & Zombies.  It’d be great to see Colin Firth reprise his role as Mr Darcy… and then slaughter a small army of brain-dead, flesh-eating zombies.  We can only hope.