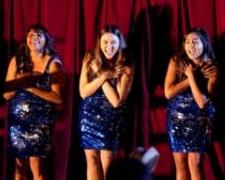 The Sapphires is a crowd pleaser.  That’s the easiest way of describing it.  Someone who clearly came to that same conclusion was Hollywood heavyweight Harvey Weinstein, a man renowned for taking small films and thrusting them into the awards spotlight.  His success stories include Pulp Fiction, The English Patient, Good Will Hunting, Shakespeare In Love, The King’s Speech and The Artist.  Weinstein was quick to buy the rights to this low-budget Australian film after it premiered at the Cannes Film Festival back in May 2012 and will soon be releasing it to international audiences.

While the rest of the world waits… we have the chance to see it first here in Australia.  Based on the stage play, The Sapphires is set in the late 1960s and follows four Aboriginal women who are looking to follow their dreams and become music stars.

As the film begins, you’ll realise that they’re a long, long, long way from that goal.  They’re on stage in a rundown pub and performing to a tiny audience as part of a talent show.  Despite their clear talent, they’ve no hope of winning.  There’s no way the bar’s racist owner (Judith Lucy in a wonderful cameo) is going to give the small prize to a group of Aboriginals.

Their efforts aren’t for nought however.  They’ve done enough to impress a young music manager who is keen to help these women get a start in their industry.  When describing Dave (O’Dowd), the term “professional” does not come to mind.  He’s a scruffy looking guy who lives out of the back of his car and doesn’t mind a drink.  Oh, and he’s got next-to-no experience.

That said, he’s still the right guy.  Dave is upfront and takes no nonsense.  He tells them to ditch their boring “country & western” tunes and opens their eyes to the world of soul music.  They’re quick learners too.  Julie (Mauboy) leads from the front with her beautiful voice but Gail (Mailman), Kay (Sebbens) and Cynthia (Tapsell) also get their chance to shine.

They soon get their big break… but it comes in a rather unexpected form.  The girls say good-bye to their families and their rural lifestyle and are flown to war-torn Vietnam.  They are being employed by the military to perform in front of the troops and boost morale.  It takes a little while to adjust to their surroundings but The Sapphires, as they come to be known, are an instant hit!

The Sapphires is to be admired as both a musical and a comedy.  There are a surprisingly large number of well-timed songs that make the story as entertaining as it is interesting.  They provide a nice break from the drama and help us appreciate why these four Aboriginal women were so popular.

Chris O’Dowd (Bridesmaids, The IT Crowd) is the standout of the cast with his light-hearted portrayal of the group’s manager, Dave.  He’s a great character – authentic, funny, likeable.  Whilst some of the dialogue between the girls feels unnatural, O’Dowd is pitch-perfect at all times.

The film’s overpowering charm will seduce most filmgoers but I was a left little disappointed by a few of the dramatic elements.  There are references to the Stolen Generation that aren’t covered in sufficient detail to generate the desired emotional impact.  I’d say the same about the rushed, unconvincing war scenes that occur late in the film.

Selected to open the Melbourne Film Festival last week, The Sapphires is likely to be one of the year’s most popular Aussie films.