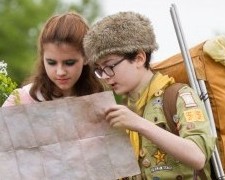 Moonrise Kingdom is a film that’s growing on me.  The first time I saw it, I liked it.  The second time I saw it, I really liked it.  We should expect nothing less than from the gifted Wes Anderson – a wonderful storyteller who has developed a knack for creating characters that are both distinctive and memorable.  A list of his best works would include Rushmore, The Royal Tenenbaums and The Life Aquatic With Steve Zissou.  All three films feature Bill Murray – another reason why you should have them in your personal DVD collection.

It boasts one of the strongest casts of the year but the two central characters in Moonrise Kingdom are actors you won’t be familiar with – Jared Gilman as Sam and Kara Hayward as Suzy.  For both, it’s their very first acting credit.  Not a bad way to start their career, huh?

They play two 12-year-olds who are part of the small community that live on New Penzance Island.  The year is 1965.  To bring us up to speed, the film’s self-aware narrator (Bob Balaban) provides a humorous overview about the island.  He also provides an ominous warning about a “well documented” storm that will occur in three days time.

You could probably label this as a romantic-comedy but it’s always tricky trying to fit Wes Anderson’s films into a specific genre.  Having fallen in love (or so they think), these two socially awkward kids have decided to run away from their respective homes and start their own, independent life together.  They have everything they think they’ll need – a tent, food, books and a battery-operated record player.  It’s all very cute.

It doesn’t take long for their disappearance to cause mayhem on the island.  A search party is immediately established consisting of Bill Murray and Frances McDormand (as Suzy’s parents), Bruce Willis (as the town’s sheriff) and Edward Norton (as Sam’s scout master).  A group of young scouts, referred to at one point as the “beige lunatics”, are also on the trail and are eager to their put their merit badge training to good use.

The best adjective I can use to describe this storyline is “strange”.  That’s not a negative.  The first two-thirds is “strange” in a funny, off-beat, loveable kind of way.  So many scenes will leave you with raised eyebrows and a wry smile.  Anderson, along with co-writer Roman Coppola (The Darjeeling Limited), deserve praise for creating this absurd premise and filling it with such witty dialogue.  The light, bubbly film score from Alexandre Desplat (Fantastic Mr. Fox) is one of the year’s best and perfectly suits the movie’s tone.

All of that said, the film’s last third is “strange” in a “strange” kind of way.  It starts veering off its comedic path and becomes a little too silly and fanciful.  They’ve tried too hard to create an over-the-top, dramatic finale.  There’s one event in particular (a lightning strike) that I’m still struggling to compute.

That’s about the only weakness I can find though.  It would have been nice to see some of the adult cast members get more screen time (e.g. Bill Murray, Frances McDormand) but I wasn’t too bothered given the terrific performances turned in by the younger actors.  At its core, this is a sweet, endearing tale about two prepubescent kids who think they’ve discovered love for the first time.  They’re a delight to watch.