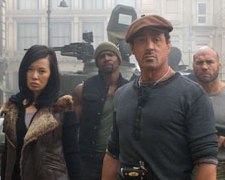 The Expendables 2 reunites us (once again) with some of our favourite action heroes from the 80s and 90s – Sylvester Stallone, Dolph Lundgren, Jean-Claude Van Damme, Bruce Willis, Arnold Schwarzenegger and Chuck Norris.  Between them, they made some pretty damn good action films.  Titles that come to mind include Terminator, Die Hard, Total Recall, True Lies and Rambo.

Unfortunately, The Expendables 2 doesn’t belong in such company.  It’s more of a comedic spoof than an action movie.  That’s not to say that fans of the genre won’t enjoy it.  There are some lengthy fight sequences and the body count is ridiculously high.  It’s been rated MA for its “strong action violence”.  Expect to see people being decapitated and blasted with a million bullets.

While the action is rather ho-hum and seen-it-all-before, the film deserves a few points for its comedy.  Arnold Schwarzenegger pops in and out of the story and it’s nice to see him back on screen again.  Jean-Claude Van Damme seems to having fun playing a cheesy villain.  It’s the likeable Chuck Norris who steals the show with a well-timed cameo and a few great one-liners.

The premise is like something from a James Bond film.  A power-hungry mastermind is looking to get his hands on some weapons-grade plutonium that is hidden in an abandoned mind.  He can then sell it on the black market and become one of the world’s wealthiest individuals.  He doesn’t seem too bothered by the fact that it will most likely start a nuclear war.

Anyway, our beloved good guys will have to team up and stop the bad guy before it’s too late.  Most of them are starting to show their age (and a few jokes are made at their expense) but I guess it doesn’t matter too much when your holding a machine gun in your hands.  All they need to do is aim and fire.

I like the idea of bringing this cast together but it needed a stronger, more captivating story.