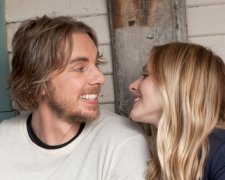 I was reflecting last week on Good Will Hunting, released back in 1997.  Matt Damon and Ben Affleck were two struggling actors trying to break into Hollywood.  Unable to get any decent roles, they decided to make their own movie!  They wrote the script, gave themselves key roles and lined up the acclaimed Gus Van Sant (My Own Private Idaho) to direct.

History now shows that it was a brilliant decision.  The film was nominated for 9 Academy Awards with Damon and Affleck picking up an Oscar for best original screenplay and Robin Williams taking home an Oscar in the best supporting acting category.  Matt Damon is now a big-time actor and the star of a successful action franchise (the Bourne series).  Ben Affleck has branched out into directing and has put together three well-critiqued films – Gone Baby Gone, The Town and Argo (to be released in early 2013).

37-year-old Dax Shepard seems to be following in a similar vein… and it’s great to see.  You may not have heard of his name but you should recognise his face.  He’s popped up in a few films – most often in a small, comedic role (When In Rome, Zathura, Without A Paddle).  You might also know him from the television show Parenthood, now in its fourth season.

Hit & Run is Dax Shepard’s “baby”.  He wrote the script.  He co-directed the film with friend David Palmer.  He edited the film alongside Keith Crocket.  He put himself in the leading role.  He used classic cars from his own personal collection.  He cast his long-time girlfriend, Kristen Bell, as his on-screen love interest.  He created supporting roles for some of his close friends.  It all came in at a production cost of $2m.

I’m impressed with the finished product.  Hit & Run is terrific.  It centres on a guy (Shepard) who lives a quiet life in a tiny American town.  It’s not a deliberate decision though.  He was involved in a series of bank robberies in Los Angeles several years ago and is now part of the witness protection program.  He changed his name to Charles Bronson (a humorous story in itself) and has kept a low profile ever since.

When his new girlfriend, Annie (Bell), is offered a dream job in Los Angeles, he is forced to make a decision.  Should he come out of hiding, risk his life and follow her to California?  The answer is yes.  They hurriedly pack and set off in his black, custom built, 1967 Lincoln Continental.

It will be a wild road trip.  Annie’s obsessive ex-boyfriend (Rosenbaum) is extremely jealous and has decided to follow them.  Also on their tale are a hopeless U.S. Marshall (Arnold) with “gun control” issues and a police officer (Rowland) who spends too much time using a gay “hook up” application on his phone.  Finally, an old criminal acquaintance (Cooper) has been released from prison and seeks a bloody revenge against Charles after being “ratted out” in court.

Hit & Run doesn’t rely on easy toilet humour or over-the-top characters to make you laugh (well, with the exception of Tom Arnold).  It’s funny without trying too hard to be funny.  There are some intelligent, level-headed exchanges in the car between Dax Shepard and Kristen Bell that are Seinfeld-esque.  For example, they talk about the use of the word “fag” as an insult and they also debate the strange guys that seem to be attracted to Charles’s classic car.  These conversations provide a nice break from the chase sequences.

There are also a few surprises.  I can guarantee that a scene in a motel will raise eyebrows!  There’s also an unexpected joke late in the film where that somehow involves both rape and racism.  It’s risky (and I’m sure it will offend some) but it highlights that this film is not afraid to take a chance.  I guess you can do that without the pressure of a big budget and an overbearing studio.

With a great group of supporting characters who are all put to good use, Hit & Run is one of the year’s better releases.  It’s a smart action-comedy with believable car chases and insightful dialogue.  Thumbs up to Mr Dax Shepard.