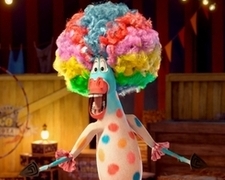 We’ve got Alex the lion, Marty the zebra, Melman the giraffe and Gloria the hippopotamus.  These four characters have been made famous thanks to the voices of ben Stiller, Chris Rock, David Schwimmer and Jada Pinkett Smith.  Combined, the first two films reeled in more than $1 billion at the international box-office.  It’s therefore no surprise to see the release of Madagascar 3: Europe’s Most Wanted.

I should begin with a quick refresher course.  The first film saw our four friendly animals removed from their home at Central Park Zoo and shipped off to a Kenyan wildlife preserve.  They never made it through and became stranded on the island of Madagascar.  They didn’t fare much better in the second film when they became stuck in continental Africa while en route back home.

This time around, they’re ticking off a new continent – Europe.  Alex, Marty, Melman and Gloria are still trying to get back home to New York but they’re going via an unorthodox route.  We begin in Monte Carlo where they’ve stopped off to collect a few of their friends.  The penguins and chimpanzees have been “holidaying” in the area and having fun at the casinos.

Unfortunately, they are spotted by the head of Monaco’s Animal Control – Captain Chantel DuBois (complete with a villainous voice from Frances McDormand).  She’s determined to capture these wild animals.  In fact, determined would be an understatement.  DuBois is an unstoppable cyborg with a sinister, unflinching facial expression.  She’s easily the best character in the movie.

The animals manage to escape but only thanks to a circus troupe that is passing through.  They sneak aboard their train and are introduced to a new group of animals that form part of the circus – Vitaly the tiger, Gia the jaguar and Stefano the sea lion.  The circus has been struggling of late but the owners are hoping to impress an important promoter who will pay for them to travel to the United States.

If you put two and two together, you should be able to see where the story is going next.  Alex, Marty, Melman and Gloria decide to become part of the circus with the hope they can “wow” audiences with some fresh acts and subsequently earn their ticket back home to New York City.

I’m generally a fan of animation but I haven’t been a big supporter of the Madagascar series.  It’s not offering much more than easy, repetitive laughs.  It lacks the drama and emotion that I remember fondly from unforgettable films like Toy Story, Spirited Away, The Incredibles, Ratatouille and WALL-E.  I prefer more from my family-orientated movies.

To put it simply, I’d say Madagascar 3: Europe’s Most Wanted is no better or worse than the earlier films.  It’s been forged from the same mould and features the same brand of humour.  It’s nice to see a few new characters but it’s not enough to make the film worth recommending as a whole… unless of course you have young kids and a couple of hours to spare.