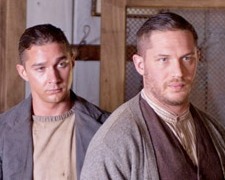 Thanks to the work of the talented production crew, Lawless transports us back to early days of the Great Depression – a time where alcohol was banned across the entirety of The United States.  The prohibition became part of the Constitution for more than a decade and supporters argued that it improved the moral fabric of society.

Of course, if you think that no booze was consumed during that period, you’d be naive.  The black market was flooded with illegal alcohol.  It was how the likes of Al Capone and Bugs Moran made millions of dollars and became such powerful gangsters.

As the opening credits promise, Lawless is based on a true story.  It has been adapted from the novel “The Wettest County In The World” by Matt Bondurant.  That’s a not a reference to the 1931 rainfall figures in Franklin County, Virginia.  Rather, this was a township that had become the centre point for a massive illegal alcohol operation.

Three brothers were responsible – Forrest, Howard and Jack.  Howard (Clarke) is a sold right-hand man but the crux of this film centres on the other two guys.  Forrest (Hardy) is the level-headed “brains” of the operations.  He keeps a low profile and you’ll be lucky to get more than a few words out of him during a conversation.  On the flip side, Jack (LaBeouf) is excitable and outgoing.  He likes walking around town in his expensive suits and is keenly pursuing the daughter (Wasikowska) of a local preacher.

You might wonder how these guys were able to get away with it for so long.  Well, that’s because everyone was in on it.  The local authorities, who didn’t mind a drink or two, could easily be bribed with a few dollars and some jars of freshly distilled moonshine.  No one even blinked an eyelid.  The arrival of Special Deputy Charley Rakes (Pearce) would change that.  He had been sent from Chicago to put a stop to the illegal alcohol that was now flooding his city.  Who would be the victor?

Lawless has a huge Australian connection in that it’s been directed by John Hillcoat and written by singer-songwriter Nick Cave.  This marks their second collaboration following The Proposition in 2005.  There are a few Aussies amongst the cast too including Jason Clarke, Guy Pearce, Mia Wasikowska and Noah Taylor.

It’s clear that the film favours the actions of the three brothers.  The supremely overconfident persona of Guy Pearce reminded me of a James Bond villain.  We’re obviously not meant to like him… despite the fact he’s the guy upholding the law.  This becomes more and more evident as the film progresses.  Was he really like this?  I’d have preferred a little more “grey” added to his character.

That said, this is a curious piece of American history and the film does a solid job highlighting the delicate balance that held everything in place.  These three brothers were making a fortune but it wasn’t always easy.  Jack’s growing confidence and cocky nature needed to be kept in check.  The most intriguing characters in the film are the law enforcement officers stuck in the middle.  They’ve been entrusted with the responsibility of upholding laws that they don’t believe in.  Which side do they take?

A few subplots could have been explored more fully (such as the one involving Gary Oldman as a Chicago mobster) but for the most part, the strong narrative will keep you interested.  The graphic depiction of the violence also gives Lawless a heavy dose of realism.  There’s one scene in particular that will be stuck in my head for a while.  Those who are little squeamish should take note of the MA rating and the warning of “strong bloody violence”.  I’m told that the book, written by the grandson of one of the Bondurant brothers, is actually far more explicit!

Without the big Hollywood blockbusters, it’s a relatively quiet time in Australian cinemas at the moment.  I know cinema owners aren’t too happy but hey, it gives films like Lawless a chance at a decent-sized release.  Do see it.