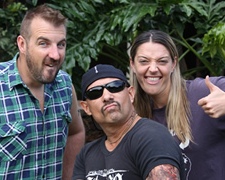 I found an entry on Wikipedia that lists the feature films that most frequently use the “F-word”.  Excluding a documentary on the subject matter (yes, one exists), the top entry is Gutterballs (with 625 uses) followed by Summer Of Sam, Nil By Mouth and Casino.  It’s amusing to see another of this week’s cinema releases, End Of Watch, in the top 10.

I didn’t attempt to count the F-bombs in Housos Vs. Authority but if someone has the patience to do so, I’d be curious to know the final number.  It feels like none of these characters can complete a sentence without uttering the word.  It’s repetitive to the point of being infuriating.  While the film won’t be winning any awards of any kind, it will at least earn a high ranking when that Wikipedia article is next updated.

The story is set in the fictitious suburb of Sunnyvale, regarded as the worst place to live in Australia.  We follow a few of the foul-mouthed, dim-witted residents (known as Housos) who enjoy their bludgy lifestyle and do whatever it takes to avoid any real responsibility.

To give you a flavour for this film’s style of “comedy”, their adventures include (1) consuming illegal drugs, (2) attacking police officers and destroying their cars, (3) starting unnecessary brawls, (4) falsely claiming welfare from Centrelink, and (5) defacing national landmarks.  They’re just a great bunch of people (note: sarcasm).

While watching this film, I thought of the politically incorrect musings of Sacha Baron Cohen in films such as Borat, Bruno and The Dictator.  His comedy is designed to be provocative and offensive… but there’s often an underlying subtext and a point he is trying to make.  There’s a great scene late in The Dictator where he draws comparisons between a Middle Eastern dictatorship and the United States.

The problem with Housos Vs. Authority is that I don’t understand its point.  Is it supposed to be celebrating the lifestyle of these bogans?  Should I happy that these lazy, offensive bums stand up to the “shackles” of authority and get away with it?  Is flashing one’s tits in public the true answer to life’s problems?

The film is a spin off from the 9-episode television series that aired on SBS in late 2011.  The show generated its fair share of controversy and it led to a petition being presented to the New South Wales Parliament to have the show banned.  I don’t advocate censorship and I’m more than happy for the show to be seen but again, I have questions – who watches this show and who finds it funny?

Even if I could find a way to admire this film for its attack on political correctness, the tiresome nature of the comedy wears thin very quickly.   It’s just the same easy jokes over and over again.  Cameos from the likes of Angry Anderson, Barry Crocker and Chopper Read couldn’t save it for me.  Fans of the TV series (whoever you are) can check it out but everyone else can steer clear.  Watching the two-minute trailer is bad enough.