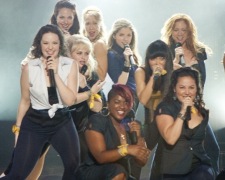 We’ve seen teen films that revolve around dance contests (Step Up) and cheerleading contests (Bring It On).  Pitch Perfect uses the same formula and applies it to the world of a cappella.  For those unfamiliar with the term, I’m speaking of a group of singers who perform a song without using background instruments.

There are many players in this ensemble but most subplots seems to revolve around Beca (Kendrick) – a freshman who is about to start college.  After being overheard singing in the dormitory shower, she is strongly pursued by an all-female a cappella group known as the Bellas.  They’re in desperate need for fresh blood and to avenge their defeat in last year’s collegiate titles.

It’s something the introverted Beca would rather not be involved in.  She loves music… but singing isn’t her thing.  She dreams of being a DJ and spends her spare hours mixing songs together on her laptop.  Her father doesn’t approve however (as is often the case in such movies).  This forces Beca to join the Bellas and prove to her father that she can commit to a project and interact with others.

I’ll cut to the crunch and say that the broader story isn’t that important here.  What you need to know is that Pitch Perfect has a fun, likeable spirit.  It’s not a game-changer within the genre but I know plenty of people, myself included, who will have a great time watching this.  It’s like an episode of Glee in hyperdrive.

What makes the film work is the huge assortment of well-crafted characters.  Kay Cannon, a writer on the 30 Rock television series, has come up with a screenplay that seems to give the right amount of time to each individual.

There’s the bossy, insecure leader of the Bellas.  There’s the cocky, arrogant leader of a rival group known as the Treble Makers.  There’s the singer who seemingly has no voice.  There are the two crazy commentators who pop up at each a cappella competition.  They’ve all got their idiosyncrasies and they’ve all got their fair share of witty one-liners.  It’s the kind of movie where the whole cast deserves credit as opposed to just one or two standouts.

The premise allows the characters to sing a variety of songs which contribute to the film’s terrific soundtrack.  The list includes Kelly Clarkson’s “Since You’ve Been Gone”, Flo Rider’s “Right Round” and Rhianna’s “Don’t Stop The Music”.  It’s not all modern stuff though.  A reference in the film to The Breakfast Club allows for the use of the Simple Minds song “Don’t You (Forget About Me)”.

With a surprising number of laugh-out-loud moments, Pitch Perfect is one of the year’s most entertaining releases.