Review: Rise Of The Guardians 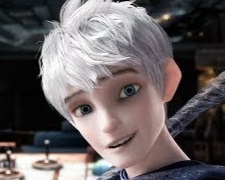 The villain is Pitch Black (Law).  His goal is to stop the children of the world from the believing in those who make it so special.  I’m speaking of Santa Claus (Baldwin), the Easter Bunny (Jackman), the Tooth Fairy (Fisher) and the Sandman.

I guess they had to stick to the novel by William Joyce but since when was the Sandman so revered?  Maybe it’s an American thing.  I got presents from Santa, chocolate from the Bunny and money from the Fairy.  My parents forgot to inform me about the Sandman but apparently he brings sweet dreams and a good night’s rest.  He’d be useful today to be honest.

You’d think that these four gifted leaders would be able to stop the bogeyman Pitch but they’re going to need a new addition to their team to get the job done.  I’m speaking of Jack Frost (Pine) – the man who brings us winter with its fresh snow and cold winds.  He’s been chosen by the mysterious Man in the Moon to join the ensemble.

Jack Frost has been around for hundreds of years but he’s never been able to understand his true purpose.  Further, he can’t comprehend why children don’t believe in him.  He brings them so much joy through snow days (where school is cancelled) as well as the fun of bobsledding through the snow or building a huge snowman.

Rise Of The Guardians is targeted at young audiences and whilst I liked the story, I have a few doubts as to whether kids will be able to follow the intricacies of the storyline.  There’s a lot to explain including how the tooth fairy has the ability to keep memories and how Pitch has the power to stop others from believing.  A friend’s young son was also puzzled as to why the Easter Bunny has an Australian accent.  We can blame Hugh Jackman for that!

That said, I still think this is another strong effort from the team DreamWorks Animation.  The imagery is superb.  From the wind rustling through Jack Frost’s white hair to the panoramic vistas as they fly through the sky, it all looks amazing.  Those prepared to pay an extra few dollars can experience it with the benefit of 3D.

What got me over the line with Rise Of The Guardians was the intriguing character of Jack Frost.  We see from the very opening scene that he has a long-forgotten past and I enjoyed following his journey of self-discovery.  Chris Pine is a good fit for the role of Jack Frost and through his voice, you sense the doubt and insecurity that clouds his mind.

Some have described the film as at the children’s equivalent of The Avengers.  Instead of characters from comic books, our action heroes are the legendary folk who our parents told us about growing up.  It’s a worthy analogy but it hasn’t been able to put bums on seats.  The film has battled in its opening two weeks in the United States and won’t match the box-office of more successful animated features this year such as Brave and Wreck-It-Ralph.