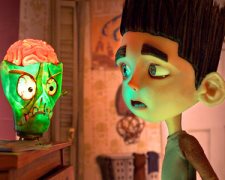 There have been a surprising number of “spooky” animated features over the past 6 months.  It started with Hotel Transylvania (September 2012), was followed by Frankenweenie (October 2012) and now we’re being treated to ParaNorman.

This film is a little different though as it uses the torturous style of stop-motion animation.   When I use the term “torturous”, I’m not referring to the audience’s reaction.  Rather, I speak of the work that goes on behind the scenes to bring the film to life.  It took two full years to complete the animation with roughly 400,000 individual frames of footage required.

Our central character is Norman Babcock (Smit-McPhee) – a young boy who is bullied at school and doesn’t have many friends.  This isn’t because he’s shy or social awkward.  Norman is ridiculed because he tells everyone that he can see ghosts and communicate with the dead.  He even speaks with his late grandmother on a regular basis.

The joke will soon be on everyone else though.  Norman is telling the truth.  The town is about to be overrun by an army of zombies!  They have returned from the dead to avenge a “wrong” from 300 years ago.  It forces Norman to team up with his new friend, Neil (Albrizzi), and concoct a plan that will stop the zombies and save the townsfolk.

ParaNorman has a good sense of humour which is summed up in the film’s tagline – “It’s all fun and games until someone raises the dead.”  There’s a great scene where Neil and Norman first become friends.  Neil tells his older brother “that we’re going to go play with the dead dog in the garden and we’re not even going to have to dig him up first!”  Suffice to say that such a statement gets a very curious look back in response.

The well-chosen voice cast includes the likeable Jeff Garlin (Curb Your Enthusiasm), the sweet Anna Kendrick (Up In The Air) and the recognisable Christopher Mintz-Plasse (Superbad).  It’s a good group.  Headlining the cast though is 16-year-old Australian Kodi Smit-McPhee (The Road, Let Me In).  It’s great to see another Aussie making a mark in Hollywood and films like ParaNorman will continue to push his career in a forward direction.

I’m not sure if young children will embrace this film in the same way they would Wreck-It-Ralph, Ice Age 4 or Madagascar 3.  The supernatural themes could be tricky and there seem to be a few more jokes/references targeted at adults as opposed to kids.  That said, I still liked ParaNorman and it deserves to be seen for its wit and the work of its passionate animators.