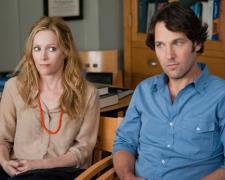 I admire Judd Apatow.  He’s a guy who wants to make successful comedies but he doesn’t always bow to Hollywood conventions.  He’s not afraid to take a few chances and think outside of the square.  Apatow’s best writing credits over the past decade include The 40 Year Old Virgin, Knocked Up, You Don’t Mess With The Zohan and Pineapple Express.

This Is 40 is something slightly different from Apatow.  Yes, there’s comedy but there’s a more serious, a more personal undercurrent to the story.  It centres on two characters that have just celebrated their 40th birthday and are stumbling into the next chapter of their lives.  They’re not sure where they’re heading and it’s left them questioning the future of their relationship.

Why I’m describing this film as “personal” to Apatow is that he’s cast his wife, Leslie Mann, in the leading role alongside Paul Rudd.  Further, he’s used his two daughters to make up the rest of this on-screen family.  When you throw in the fact that recently turned 45 years of age, you’d have to ask yourself the question – how close to home is this storyline?

Apatow actually describes his life as “pretty boring” and not quite as exaggerated as what you’ll see in the movie.  That’s not to say that a few of these scenes aren’t based on actual events.  He wants to make us laugh... but he also wants us to reflect on our own lives and our own connections.

When you break it down, This Is 40 highlights the difficulties that come with being in a long-term relationship.  It’s not meant to be dramatic and depressing.  Rather, it’s a movie that wants to provide comfort.  When you’re spending every day with the same person for the rest of life, there are always going to be a few bumps along the way.  That’s normal and you’d be naive to think otherwise.

Fans of the 2007 film Knocked Up may already be familiar with these characters.  Pete (Rudd) and Debbie (Mann) were the two best friends of the lead couple – played by Seth Rogen and Katherine Heigl.  Some might describe this as a “spin off” but there’s no real need to have seen the earlier film, which is terrific I must point out, before this one.  There’s very little overlap.

To give you a flavour of the film’s content, the opening scene sees Pete and Debbie having sex in the shower.  It’s all going fine until… Pete admits to taking a Viagra tablet beforehand.  Debbie then kick starts a heated debate about why he can’t maintain a “non-assisted” erection and whether he still finds her attractive.  Whilst many of us won’t be able to relate the specifics of such a moment, you will understand what’s going through each of their heads during the argument.

Whilst I like what Apatow is trying to do in this film, I’m not 100% sold on the delivery.  Every conversation feels like it’s a minute too long.  It’s as if these characters are trying too hard to demonstrate their flaws and insecurities.  I got the message early on and when you drag it out into 134 minutes, a lengthy gamble for a comedy, you’re going to struggle to hold my attention.

The secondary cast includes the likes of Albert Brooks, who plays Pete’s financially struggling father, and John Lithgow, as Debbie’s long-lost dad who unexpectedly re-enters her life.  They’re not particularly exciting subplots and I’d question their necessity.  There’s a scene-stealing moment from Melissa McCarthy (Bridemaids) during, strangely enough, the closing credits.  It generated more reaction at my preview screening than any other part of the movie.

While I’m sure there are some who will respond to the film’s “close to home” style of comedy, This Is 40 didn’t connect as well as I’d hoped.