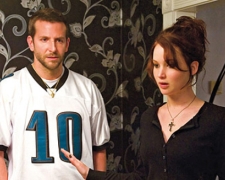 You only have to spend 5 minutes with Pat Solitano (Cooper) to realise that he’s struggling.  He battles bipolar disorder and is clearly not in control of his emotions.  Having spent 8 months in a mental care facility, Pat is now back living with his parents (DeNiro and Weaver).  They can see that their strong-headed son isn’t taking his medication and they’re worried that he’s not getting any better.

Pat wasn’t institutionalised of his own volition.  He was placed there by the court after a violent incident involving his ex-wife (which isn’t shown to us until mid-way through the film).  She subsequently took out a restraining order against her husband and left Philadelphia for good.  The two haven’t spoken since.

It’s this broken relationship that Pat can’t come to grips with.  When he speaks to others, he confidently professes that he and his wife will soon get back together.  It’s as if he’s forgotten about his past indiscretions and thinks that all has been forgiven.  His family and friends don’t know how to react.  They’re concerned about Pat’s delusional comments but they don’t want to react negatively and risk upsetting his delicate mental state.

With the stage set, writer-director David O. Russell (The Fighter) introduces a new love interest to further complicate the situation.  Her name is Tiffany (Lawrence) and she’s battling her own mental demons following the unexpected death of her young husband.  They meet for the first time at an impromptu dinner party and have a humorous exchange where they contrast and compare their medication.

What develops is a one-sided relationship.  Tiffany is “head over heels” for Pat and is using every trick in the book to spend time with him.  Unfortunately for her, Pat is still wearing his blinkers and only has eyes for his ex-wife.

If there’s one reason why you should see this film, it’s to admire the wonderful performances from Bradley Cooper and Jennifer Lawrence.  Both actors have created troubled characters that are also immensely likeable.  We can see their flaws and their propensity to irritate… but we appreciate their problems and hope they can find comfort, happiness.

Silver Linings Playbook has received 8 Academy Award nominations and in the process, has become the first film is 31 years to be nominated in all four acting categories.  Both Cooper and Lawrence will be there on Oscar night alongside Robert DeNiro and Australian Jacki Weaver.  It’s nice to see Weaver recognised again (after Animal Kingdom two years ago) but I’m a little surprised about her nod.  It’s a sweet performance but it doesn’t require much more than an American accent and a concerned look on her face.

There’s so much to love about this film during its first two-thirds including the “getting to know each other” scenes between Cooper and Lawrence and the light-hearted exploration of their mental condition.  Unfortunately, the film changes tact in the final third and becomes a safe, silly, unrealistic romantic comedy.  The actors were the same but it felt like I was watching a different movie with different characters.  Oh, and if anyone can explain the purpose of Chris Tucker’s character, I’m all ears.

It’s been showered with honours, including the prestigious Audience Award at the Toronto Film Festival, but I’m happy to sit just outside of the main group when it comes to Silver Linings Playbook.  Most will describe it as “great”.  I’m describing it as “good”.