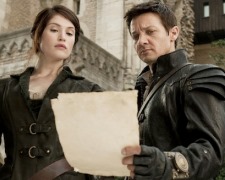 Once upon a time, there was a boy called Hansel and a girl called Gretel.  Wandering through the woods, they came across a house made of candy and gingerbread.  What they didn’t know… was that house belonged to an evil witch who liked to cook and eat small children.  Hansel and Gretel had the last laugh though.  They shoved the witch into the oven and she burned to death.

The entirety of this German fairy tale is covered before the opening credits even begin in Hansel & Gretel: Witch Hunters.  It sets the stage from which writer-director Tommy Wirkola has tried to create an 80 minute epilogue to this famous story.

It turns out that Hansel and Gretel weren’t satisfied with the death of just one witch.  Now that they’ve grown up (and look like Jeremy Renner and Gemma Arterton), they want to rid the whole world of these villainous creatures by “setting their ass on fire”.  Oh, and get paid handsomely in the process.  It’s a creative but still dangerous way to make a living.

For their latest assignment, they’re been brought in by the mayor of a small town who is worried about the number of children who has recently gone missing.  Hansel and Gretel will have to battle more than the witches responsible though.  The local sheriff (Stormare) isn’t happy that this authority is being trumped.  He’d like to continue his evidence free, Crucible-like strategy and pick women at random to burn at the stake.

We’ve seen a few attempts over the past year to revive a simple fairy tale and transform it into a big screen action-adventure.  I preferred the more intricate story in Snow White & The Huntsman over Mirror Mirror but both films showed that such an adaptation can appeal to audiences.  A sequel is planned for Huntsman given its success at the international box-office.

There’ll be no such sequel to Hansel & Gretel: Witch Hunters.  This movie is terrible.  There’s graphic violence, coarse language and even a splash of nudity.  It’s all been included to help sell this film to the young adult crowd.  If you like the thought of a giant troll stamping on a man’s face and squashing it into a million gooey pieces, make sure you buy a ticket to opening weekend.

I’ve got no issue with the inclusion of violence, language and breasts… but the film’s problem is that this all seems more important that actually telling a story.  The forgettable premise revolves around some ancient legend that will allow the witches to become immune to the effects of fire.  Famke Janssen plays the “lead” witch but she’s not particularly scary or threatening.

There’s also a lack of witty banter between the characters.  If you’re going to create such a silly story, why not make it funny?  For the record, the dropping of an unexpected f-bomb does not count as humour.  Don’t expect any romance either.  They’ve cast Jeremy Renner and Gemma Arterton (both easy on the eye) but keep in mind that their characters are brother and sister.  Part of me thinks they'd have been better casting Jason Statham and Milla Jovovich given the film's theme of action first, plot second.

It’s certainly not for kids… and I’ve got doubts about whether Hansel & Gretel: Witch Hunters is fit for anyone else.