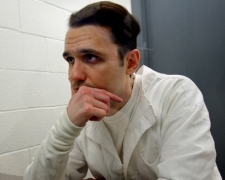 West Of Memphis is the first documentary to be released in Brisbane cinemas in 2013 and it’s a damn good one. Those who have seen any of the films in the Paradise Lost trilogy will already be familiar with the subject matter. For everyone else… get ready to have your eyes opened.

On 5 May 1993, three 8-year-old boys were murdered in West Memphis, Arkansas. They went missing after school and their bodies were subsequently found in a shallow creek. A month later, three young men were arrested for the crime – 18-year-old Damien Echols, 17-year-old Jessie Misskelley, and 16-year-old Jason Baldwin. They became known as the West Memphis Three.

As you’d expect, this was a high profile case. The fact that police believed the murders to be part of a Satanic ritual, based on wounds found on the bodies, only heightened the public’s interest. Despite pleading otherwise, all three men were found guilty of the crime. Misskelly and Baldwin were sentenced to life in prison. Echols was sentenced to death by lethal injection.

Two years later, an Emmy Award winning documentary entitled Paradise Lost: The Child Murders at Robin Hood Hills raised concerns about the way in which the case had been handled by the police. Evidence had been mishandled, confessions had been coerced, and leads had not been fully investigated. Could it be possible that these three men were innocent?

West Of Memphis runs for just under two a half hours, lengthy for a big screen documentary, but there’s a good reason for that – there’s so much material to cover! The film chronicles the crime and then follows the pursuit of these three men to clear their name. They had help from some powerful people, moved by the original documentary, but you’ll be left shaking your head at the rigidity of the Arkansas legal system and the inability of the authorities to admit they made mistakes.

Academy Award winning director Peter Jackson (The Lord Of The Rings) and his wife, Fran Walsh, have long shown an interest in the West Memphis Three. They paid for their own private investigators to re-examine existing evidence and perform additional forensic testing. They were also responsible for putting up the money for this film. This is a story they want heard by as many people as possible.

Impressed by her work on the 2006 documentary Deliver Us From Evil, an alarming look at child abuse within the Catholic Church, Jackson brought in Amy J. Berg to direct to West Of Memphis. I remember being blown away by the revelations in Deliver Us From Evil and I’ve never been able to shake its disturbing content. You can expect a similar reaction here. West Of Memphis isn’t afraid to show us the graphic nature of the crime and more importantly, it isn’t afraid to point fingers at those whose actions deserve to be questioned.

It’s kind of funny that that we have a genre of film known as “horror” that is supposed to provide frights and scares. Seldom does it do so. Films in the Saw and Paranormal Activity franchises rely on the same tricks again and again. We all know it’s not real. If you want to a truly horrifying film-going experience, check out West Of Memphis. It will leave you stunned.