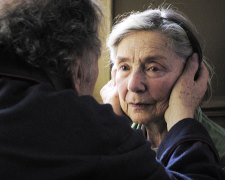 George and Anne are a long married couple who are well into their twilight years. Their ages are never revealed by the two characters are played by 82-year-old Jean-Louis Trintignant and 85-year-old Emmanuelle Riva.

The film opens with the pair attending a piano recital in a beautiful concert hall. They catch up briefly with the pianist after the show and then catch the bus back home. It will be their last night out together. The next morning, Anne suffers a stroke and is rushed off to hospital.

Amour is typical of director Michael Haneke (Hidden) in that he doesn’t want audiences to feel particularly comfortable. Not every piece of this story is illustrated on screen. It’s as interesting for what it doesn’t show… as opposed to what it does show. For example, we do not see Anne’s stroke or her resulting time in hospital, despite it being a key event. On the flip side, we watch Anne lying in bed reading a book, we watch George let a pigeon out the window, and we watch a housekeeper vacuum a rug in the living room.

Never leaving the confides of the modestly sized apartment, the film follows these George and Anne as they deal with the battles, both physical and mental, that come when we reach a ripe old age. It seems that Anne doesn’t have much longer to life. The stroke has left part of her body paralysed and she can no longer get around without the assistance of a wheelchair. Her condition deteriorates with each passing day and unwilling to place her in an aged care home, George employs a part-time nurse to make Anne’s remaining time as comfortable as possible.

This is a sad story, pure and simple. I didn’t find these two characters particularly interesting but it’s still hard not to be moved watching them make the most of their final moments together. Many will have gone through similar experiences with loved ones and will be able to relate. I can also understand why some may choose not to see the film. Rarely has this subject matter been depicted so realistically, so honestly. You always know where the story is heading but it’s still tough to watch.

It’s a touching performance from Emmanuelle Riva who at the age of 85, has become the oldest actor ever nominated for an Academy Award. Making it even more special is the fact this is her first nomination. I guess you’re never too old to finally make it in Hollywood! It’s a shame that Jean-Louis Trintignant, who is just as good, hasn’t received the same recognition throughout the awards season. I admire Haneke’s style… but it’s the performances of these two actors that I’ll remember most.

Winner of the Palm d’Or at the Cannes Film Festival and nominated for 5 Academy Awards including best picture, Amour is an affecting piece of cinema.